The flower garden which my mother had lovingly nurtured, even planting a now-thriving Christmas tree, was swamped. 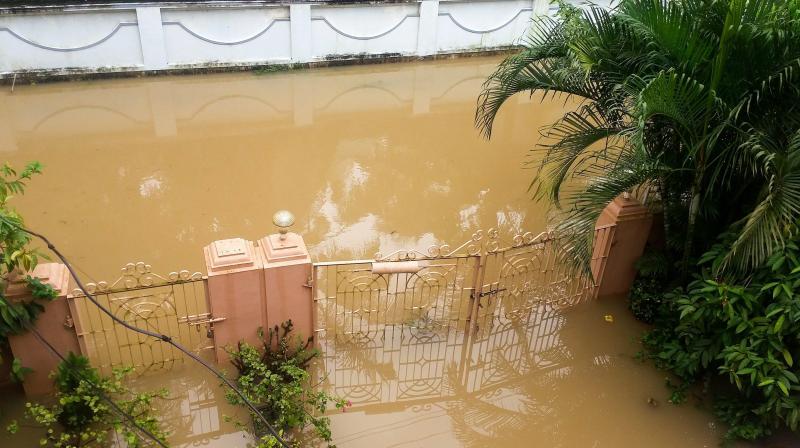 Palakkad: Rains have been relentless for the past several days. Fear of rising water entering our home has snatched away sleep. The thought of rushing out of the house in the middle of the night is frightening.

The unprecedented rains lashing Kerala, which have flooded large swathes of the state, reached Palakkad town where my elderly parents live on August 9.

When I called them from New Delhi in panic, they told me water had entered the ground floor of our two-story house. Furniture was floating, they said. The refrigerator had fallen; Utensils, knickknacks and clothes were swept away; the kitchen was gutted.

With water filling all the rooms, they moved to the first floor, which is an independent unit. Thankfully, they had food stocks and there is also a kitchen on the first floor.

Worried about their safety, I flew to Coimbatore on Monday, August 13, and took a bus for a one-hour ride to Palakkad. Mercifully, the rain had eased a little when I arrived a little after noon, and I could make it to the house without incident.

The sight that greeted me was a shock.

Our home, for more than two decades, was a mess even though my father, who is 72, and 66-year-old mother, had cleaned up the ground floor with the help of neighbours. But rains continued to beat down relentlessly.

A canal nearby, which joins Kalpathy river a few kilometers away, was overflowing, its brownish water slowly spilling out of the embankment and adding to the gurgling rivulets on the streets bisecting mostly single-story homes on both sides.

Next day, the skies opened up and the heavy downpour lasted almost the entire day. The front yard was flooded. The flower garden which my mother had lovingly nurtured, even planting a now-thriving Christmas tree, was swamped.

The only signs of vegetation were the two short hybrid coconut trees, their fronds and trunk sticking out defiantly above the muddy water.

With no electricity, and mobiles phones running out of power, many of us in the colony were cut off from the outside world. We depended on word-of-mouth information from locals who would periodically visit the homes to check on residents.

Those who still had mobile phone connectivity checked desperately on WhatsApp for information or tried to call rescue teams.

Most of the time, the numbers were busy or just did not get connected. While shifting out was the main priority, another concern was about reptiles and poisonous snakes swarming in the brownish waters.

On Wednesday, there was a respite. Only a drizzle most of the day!

I went out and brought some groceries. But the worst was waiting for nightfall. After 8 pm it rained all night, the sound of the thick raindrops lashing against the tiled roof and shuttered windows was monotonous and scary. Every hour or so I would wake up and go to the front door to check the water level outside. Not that it would have made a difference. But I thought I could be prepared if I had to evacuate with my parents to a hotel or relatives place, also in a Palakkad neighbourhood that was still dry.

Perhaps we should have left the previous day. Because soon after first light, the water rose steadily.

Enough was enough I thought, and called a friend, who sent a group of young boys to extricate us. They came in an auto-rickshaw, parked it at the end of the street and waded through knee-deep water to reach us, carrying with them a large metal cooking vessel, flattish and round, twice the size of cable TV antenna.

The plan was to use it as a boat to ferry my parents to the auto.

Jittery at first, my mother reluctantly sat on a plastic chair, which was positioned in the centre of the makeshift boat. Steeling herself, she held on tightly to the chair while the boys pulled the boat up to the auto. They came back to fetch my father in a similar fashion.

I walked through the knee-deep slush, dropped them at a relative's place and flew back to hot and humid New Delhi.

Our neighbours, a septuagenarian couple, decided to stay back in their home.

"I hope things will back to normal soon ... but we are afraid whether shutters of nearby dam will be raised further," said the lady of the house known to us as Ambika chechi.

She was talking about rising water levels at Malampuzha dam, which is the main water source for Palakkad as well as a picnic spot.

A couple of days after his family was forced to move out of their rented premises, a middle-aged man was walking in knee-deep water to buy milk and other essential supplies.

When I told him that the downpour is getting heavier, he said: "We have already seen the worst, what more can we prepare ourselves for. Let's hope for the best".

(The first person account is by Manoj Rammohan, a PTI Senior Assistant Editor in New Delhi. He was briefly stranded by the floods in Kerala.)