Many places on arterial national highways and the main centre road were flooded, leading to the suspension of traffic. 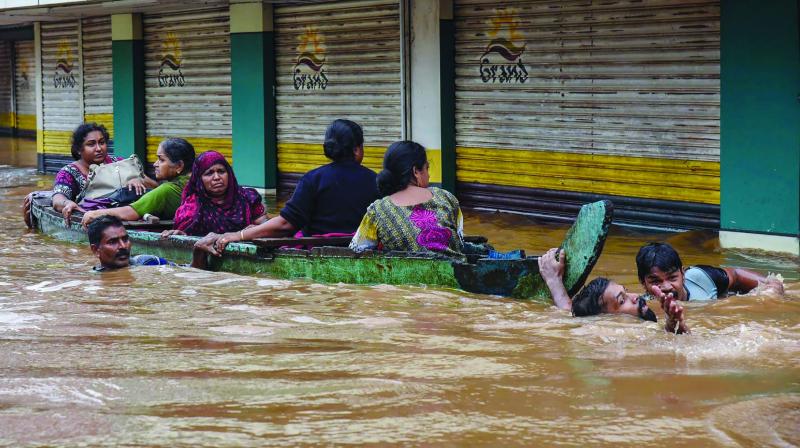 Kochi: Distress calls flooded media offices and revenue helplines from among 10,000-odd people trapped in homes and other buildings in the 12 worst-hit districts as the death toll in incessant rains and swollen rivers rose to 92 in two days on Thursday.

The Army, Navy, Air Force, disaster management and police personnel battled the rising waters to take people to safety in dinghies and other craft. Fishermen from Kollam volunteered with rescue operations in their country craft in Pathanamthitta.

Many places on arterial national highways and the main centre road were flooded, leading to the suspension of traffic. Fourteen people died in a landslide at Kuranchery in Thrissur in the single worst mishap.

Pathanamthitta bore the brunt with the entire district reeling under rising water level. Kannur, Palakkad, Ernakulam and Idukki in the north and central Kerala suffered an unprecedented loss of life and property in the monsoon.

Rains are expected to last till Sunday and the meteorological department has issued a red alert warning of heavy to very heavy rainfall in the worst affected districts of Ernakulam, Idukki, Pathanamthitta, Thrissur, Palakkad, Malappuram, Kozhikode and Kannur.

Heavy rains at isolated places are also forecasted in the remaining six districts. The rains, according to the MET department, are likely to moderate from Sunday.

For the first time in the history of Kerala, 58 dams under the KSEBL and 28 under the irrigation department have reached the full reservoir capacity forcing authorities to open shutters and people on the banks to scamper to safety.

Kuttanad in Alapuzha braced for another onset of flooding. The district administration asked the people to relocate from existing relief camps to new camps in other places.

The movie clip of a portion of Ambayathode hill near Kottiyoor in Kannur being swept away in a landslide captured the fury of rains, reeling under the biggest natural disaster in living memory.