PM Modi said he would be reaching Kerala later on Friday 'to take stock of the unfortunate situation due to floods there.' 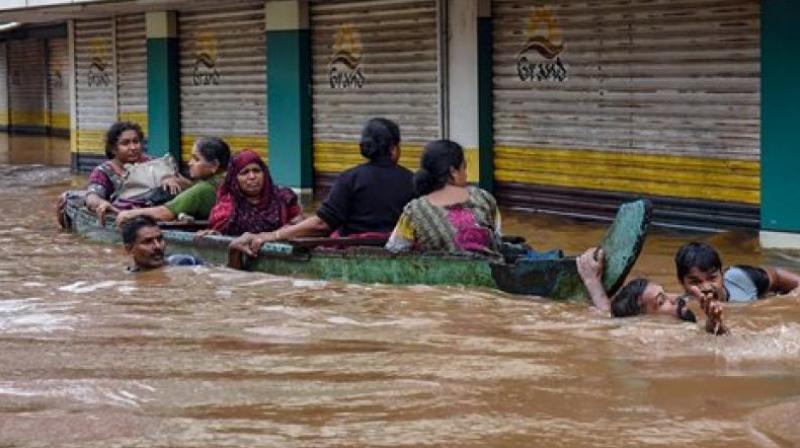 Flood situation in Kerala is worsening with every passing day and the state is expected to receive heavy rains for the next three days.

Torrential rains triggered landslides and floods in various parts of the state.

Asking people to be cautious, the chief minister's office in Kerala tweeted that all districts apart from Kasargod are under red alert. The Meteorological Department has warned that heavy rains to affect 13 districts.

Prime Minister Narendra Modi has decided to visit Kerala to take stock of flood situation in the state where more rescue teams have been pressed into to moving stranded people to safer places.

He tweeted that he would be reaching the state later on Friday evening "to take stock of the unfortunate situation due to floods there."

The prime minister spoke with Kerala Chief Minister Pinarayi Vijayan on Friday morning. "We discussed the flood situation across the state and reviewed rescue operations," PM Modi, who has been in touch with Vijayan for the last two days, said.

PM Modi will leave for Kerala soon after the funeral of former prime minister Atal Bihari Vajpayee in New Delhi. 93-year-old Vajpayee breathed his last on Thursday at AIIMS in Delhi.

After an overnight stay at Kochi, the Prime Minister will undertake an aerial survey of the flood affected areas on Saturday, Union Minister K J Alphons said.

Meanwhile, rescue operations are on in full swing in flood affected Kerala. Four Capital Ships of Indian Coast Guard have reached Kochi and have joined the Disaster and Relief team in the rescue and relief operations.

Meanwhile, flight operation at Cochin International airport will remain suspended till August 26 as the runway is still submerged in flood waters.

A CIAL release on Thursday said that the airport operations have been temporarily suspended up to 2 pm, August 26 due to very high flood situation and with key essential facilities like runway, taxiway, apron. NAV aids are under submerged condition.