The Army’s flood relief columns are involved in relief and rescue operations in Purabheti and Jaklabandha. 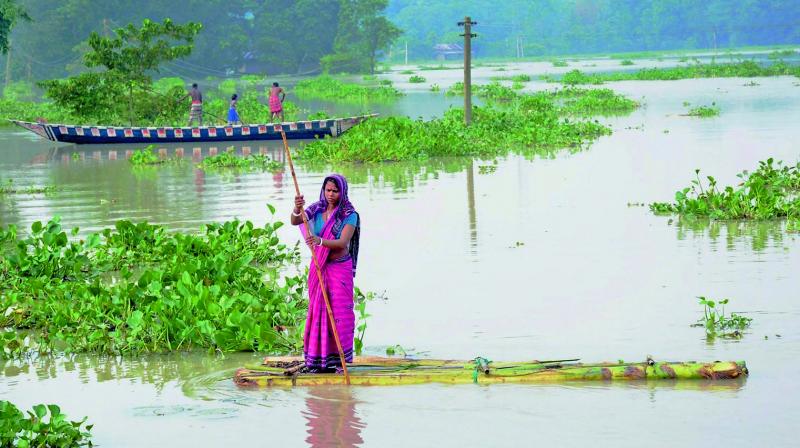 Guwahati: The flood situation remained grim in Assam on Wednesday as most of the rivers recorded a rising trend, leading to inundation of national highways at several places in western Assam thereby disrupting road communication. The floodwater has also inundated railways tracks, leading to cancellation, diversion and short termination of train services in Assam.

Meanwhile, Assam chief minister Sarbananda Sonowal on Wednesday left for Delhi to meet PM Narendra Modi and apprise him of the preliminary damage caused by the third wave of floods.

The second wave of flood has spread to 25 out of 32 districts, claiming 11 more lives besides affecting over 33 lakh people in the state. More than 1.38 lakh people, who have been displaced due to floods, are taking shelter in 629 relief camps set up by the state administration.

The Army was assisting the civil administration in rescue and relief operations as the Brahmaputra River and its tributaries were flowing above danger levels, snapping surface communications in many parts of the state.

According to a defence spokesperson, troops of Gajraj Corps were involved in relief and rescue operations in Nagaon and other districts of western Assam.

The Army’s flood relief columns are involved in relief and rescue operations in Purabheti and Jaklabandha. They have established liaison with the administration and are coordinating relief operations with them, he said.

Amidst the fear of starvation death of wildlife marooned on highlands, the state forest department and several wildlife NGOs has also intensified relief and rescue operation in wildlife sanctuaries.

With a majority of areas under Kaziranga National Park, Pobitora Wildlife Sanctuary and Lawkhua Wildlife Sanctuary inundated, a large number of animals were taking shelter in the highlands or have moved to safer areas across the hills, the forest department said.

The forest officials said that they have spotted a large number of wild animals taking shelter on highlands in Kaziranga National Park.