In a first, Army adds 6 Apache attack helicopters to arsenal

The go ahead was given at a meeting of the Defence Acquisition Council (DAC) chaired by Defence Minister Arun Jaitley. 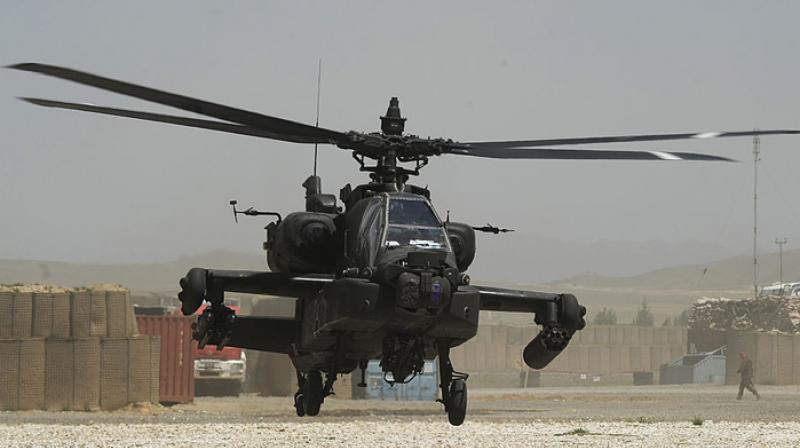 New Delhi: In a major decision, the defence ministry on Thursday approved procurement of six Apache helicopters along with weapons systems from American giant Boeing at a cost of Rs 4,168 crore for the Army which will be its first fleet of attack choppers.

It will be a follow on order to the deal India had signed with Boeing and the US government for 22 Apache helicopters and 15 Chinook heavy-lift choppers in September 2015.

A meeting of the Defence Acquisition Council chaired by Defence Minister Arun Jaitley cleared the long-pending proposal to procure the attack helicopters for the Army which has been pressing for the choppers, the sources said.

The AH-64-E choppers are known as one of the most advanced multi-role combat helicopters which have advanced weapons systems and night-fighting features.

After the government finalised the deal for 22 Apache helicopters for the Indian Air Force, the Army had been pushing for follow on orders of 11 choppers for it, arguing that the ground forces need them considering the changing security scenario in the region.

However, the IAF was not in favour of the Army's proposal. Till now, the Army does not have any attack helicopter.

The Rs 4,168 crore deal will also include cost of weapons, ammunition, spares and associate equipment and training.

The Defence Acquisition Council, the defence ministry's highest decision-making body on procurement, has also cleared a proposal to procure two gas turbine engines from Ukraine at a cost of Rs 490 crore for two ships which are being built for the Indian Navy by Russia, the sources said.

They said the proposal to procure the attack helicopters will have to be cleared by the cabinet committee on security before the deal could be inked.

Army sources said the attack helicopters, which are expected to be delivered by 2020, will significantly enhance armoured division and will strengthen the Army's capability to carry out combat operations in border areas.

The total cost for the 22 Apache helicopters and 15 Chinook choppers was around $3 billion.