Do you want to destroy Taj Mahal, SC asks Centre

The scathing remarks came during the hearing of an application seeking its nod to cut over 400 trees to lay down additional railway track. 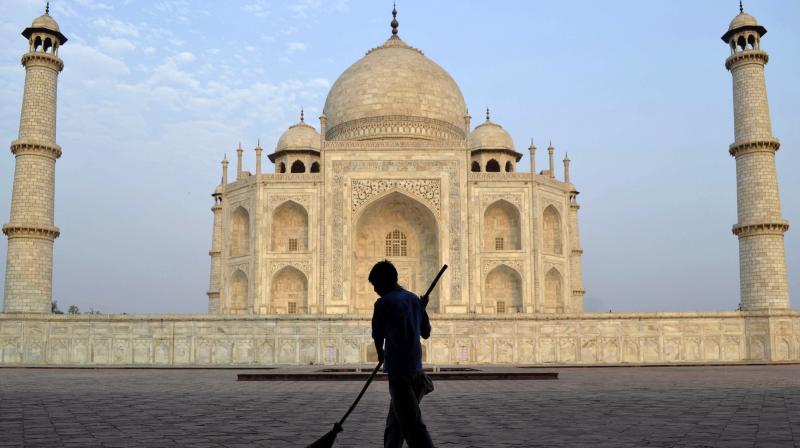 A worker sweeps in front of the Taj Mahal in Agra, India. (Photo: AP)

New Delhi: “Do you want to destroy” the world famous Taj Mahal, the Supreme Court asked the government on Thursday.

The scathing remarks by the apex court came during the hearing of an application seeking its nod to cut over 400 trees to lay down an additional railway track between Mathura in Uttar Pradesh to Delhi.

“This (Taj Mahal) is a world famous monument and you (government) want to destroy it? Have you seen the recent pictures of Taj? Go to the internet and have a look at it,” a bench comprising Justices Madan B Lokur and Deepak Gupta said.

“If you want, then file an affidavit or application and say that the Union of India wants to destroy the Taj,” the bench said.

The apex court, which is dealing with a petition filed by environmentalist MC Mehta, has been monitoring development in the area to protect the historic Taj Mahal, built by Mughal emperor Shah Jahan in memory of his wife Mumtaz in 1631 and which is a UNESCO World Heritage Site.

The court was hearing an application which has sought its nod to cut around 450 trees there in an around 80 km stretch on which the additional railway track would be laid between Mathura and Delhi.

The plea has said that in order to clear the bottleneck of train movement, it was necessary to lay down the additional track in the stretch. The court would hear the matter next month.

Mehta, in his PIL, has sought protection of the Taj from the ill effects of polluting gases and deforestation in and around the area.

The apex court had earlier passed a slew of directions on the issue of protecting the iconic monument.