India   All India  17 Aug 2017  Congress to use ‘Gandhigiri’ to clean up Gorakhpur
India, All India

Congress to use ‘Gandhigiri’ to clean up Gorakhpur

Babbar told reporters that the Congress would donate 10 ambulances to the medical college in Gorakhpur where the deaths took lace. 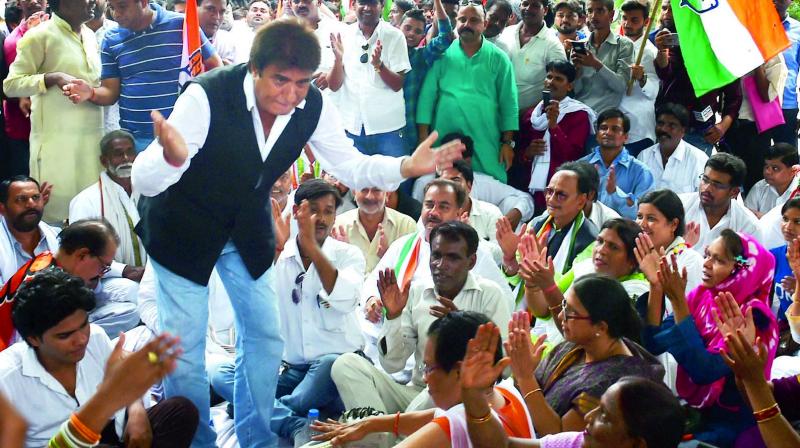 UP Congress chief Raj Babbar along with party workers raise slogans during a protest in Lucknow on Wednesday against the infant deaths. (Photo: PTI)

Lucknow: Taking a leaf out of a Bollywood potboiler, the Congress will now engage in “Gandhigiri” in UP to “awaken” the Yogi Adityanath government on the poor health services in the state following the death of 63 children in the Gorakhpur tragedy.

Congress Sewa Dal volunteers from Thursday morning will hold a parade before the district magistrate’s office in Gorakhpur. Armed with brooms, buckets, gloves, masks and a pick up van, the Sewa Dal activists will “request” the district magistrate to inform them about the dirty places that need to be cleaned. This routine will be followed every day, Raj Babbar, the Uttar Pradesh Congress Committee president said.

The Congress started its campaign on Wednesday by squatting in front of Mahatma Gandhi statue at GPO Park and singing Raghupati Raghav Raja Ram for almost two hours, before they were arrested. Mr. Babbar told reporters that Uttar Pradesh chief minister Yogi Adityanath has repeatedly said lack of hygiene was responsible for spread of Encephal-itis in Gorakhpur.

“The Congress felt it was its duty to help in the Swachh Bharat campaign and clean Gorakhpur, which remains dirty though the chief minister has been representing it in the Lok Sabha since 1998. We will start this campaign on our own without outside help,” he said.

Mr. Babbar told reporters that the Congress would donate 10 ambulances to the medical college in Gorakhpur where the deaths took lace. They will move out into the rural areas and bring children who show symptoms of Encephalitis to the hospital, he said.

This apart, the party will also set up a help desk for six hours daily in government hospitals, manned by its volunteers in the party’s medical cell. “Patients facing problems in the hospitals can approach us and we will communicate the same to the chief minister,” Mr. Babbar said.

Replying to a question, he denied that the Congress was trying to gain political mileage out of the Gorakhpur incident.

“It is the state government and the BJP which is making a mockery of the incident. They have killed the future of our country. We are just doing our own work for the people,” he said.

Mr. Babbar said, these programmes would continue until the guilty were punished.