The major cause of concern for the government has been the rising water level in four rivers - Kosi, Bagmati, Kamala Balan and Mahananda 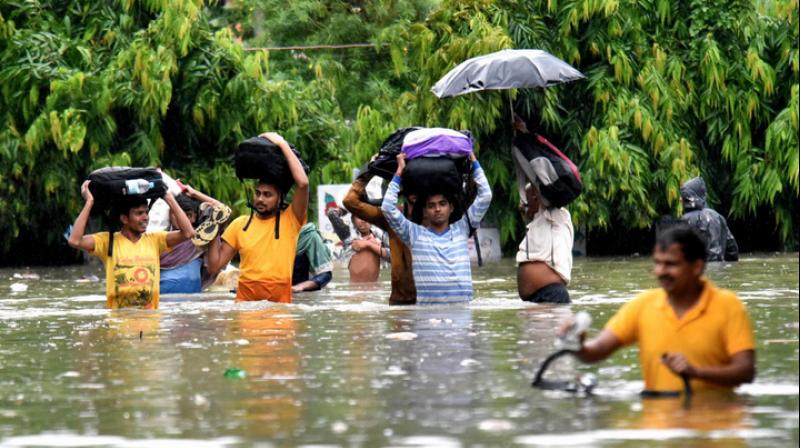 All major rivers above danger mark in Bihar. (PTI Photo)

Patna: With major rivers flowing above the danger mark, the state government has started taking adequate measures to deal with the flood crisis in Bihar.

The major cause of concern for the state government has been the rising water level in at least four rivers - Kosi, Bagmati, Kamala Balan and Mahananda due to heavy rains last week in Terai region of Nepal.

The water level in river Ganga too is gradually increasing, officials said.

According to reports, a total of 2.18 lakh people across 137 panchayats have been affected by the floods caused by heavy rainfall, up to 45 per cent above normal, in the catchment areas of Nepal.

Sources said that more than 3000 people residing in badly affected regions have been evacuated so far. The state administration has also set up relief camps and community kitchen in districts where the situation is grim.

The worst affected districts in Bihar have been West Champaran, Darbhanga, Gopalganj, Supaul, Samastipur and Muzaffarpur.

On Thursday parts of a newly constructed bridge over Gandak River washed away in the flood-affected Gopalganj district.

While the state government clarified that, “the bridge was safe and only approach road was damaged due to the flood” the opposition as well an NDA ally LJP raised serious questions on Chief Minister Nitish Kumar’s “zero corruption” policy.

The opposition RJD also demanded the resignation of the concerned minister Nand Kishore Yadav and Bihar CM Nitish Kumar over the issue.

“Bihar is always affected by floods and sometimes even the roads get swept away. The bridge you are talking about is safe and only approach road has been damaged due to the flood. This is a natural disaster and government is taking all kind of measures”, Bihar road construction minister Nand Kishore Yadav said.