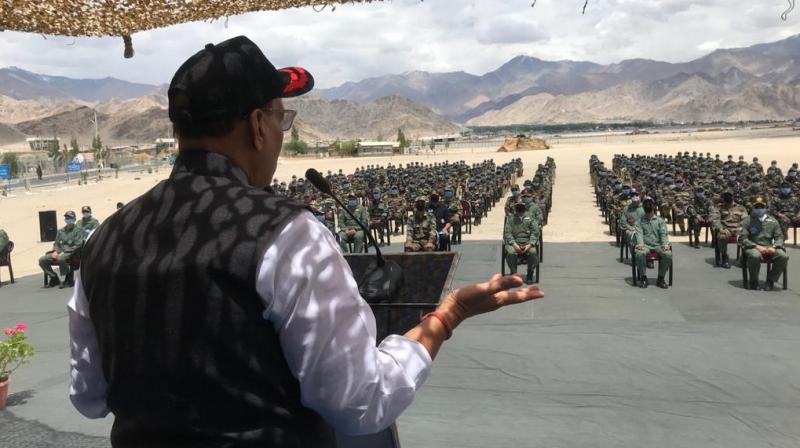 Defence Minister Rajnath Singh on Friday said talks are underway to resolve the border dispute between India and China and assured that not one inch of Indian land can be taken by any power in the world.

"Talks are underway to resolve the border dispute (between India and China) but to what extent it can be resolved, I cannot guarantee. If we can find a solution through talks, nothing would be better than that," said Singh while interacting with the Indian Army and Indo-Tibetan Border Police (ITBP) personnel here.

Referring to the India-China border standoff, he said, "Talks are underway to resolve the border dispute but to what extent it can be resolved I cannot guarantee. I can assure you, not one inch of our land can be taken by any power in the world."

The Defence Minister interacted with the troops here along with Chief of Defence Staff General Bipin Rawat and Army Chief General MM Naravane.

"I consider it to be my good fortune to interact with you all. All the countrymen are proud of the miraculous work done by our army from time to time. Even our Prime Minister came here and said the martyrdom of our soldiers will not go in vain," Singh added.

He motivated the troops here by adding that whatever has happened recently between the army personnel of India and China, Indian soldiers have not only protected the border of the country but they have protected the honour of 130 crore Indians.

"You have such sense of self-respect that you can bear everything but cannot let your self-respect get hurt. National pride is at the top... If anyone dares to look at the borders of our nation, at that time our national self-respect awakens," said Singh.

Emphasising on finding a diplomatic solution to the standoff, he further said, "If a solution can be found by talks, there is nothing better."

Singh elaborated on the recent stand-off between troops of India and China at PP14 and how some of Indian personnel sacrificed their lives protecting the country's border. "I am happy to meet you all but also saddened because of their loss. I pay my tributes to them," he added.

Indian Army T-90 tanks and BMP infantry combat vehicles carried out the exercise at Stakna, Leh in presence of Singh, Chief of Defence Staff and Army Chief.
Defence Minister is on a two-day visit to Ladakh and Jammu and Kashmir. He will take stock of the situation at both the Line of Actual Control (LAC) and the Line of Control (LOC).

While Pakistan constantly violates ceasefire from across the LoC, China has continued to intrude into Indian territory in Ladakh region in recent past, escalating tensions between India and its eastern neighbour.

On June 15, 20 Indian soldiers laid out their lives during combat with Chinese forces in Galwan valley, leading to tensions between both nations. Chinese soldiers subsequently started moving back following dialogues between two countries through the military level and diplomatic level.