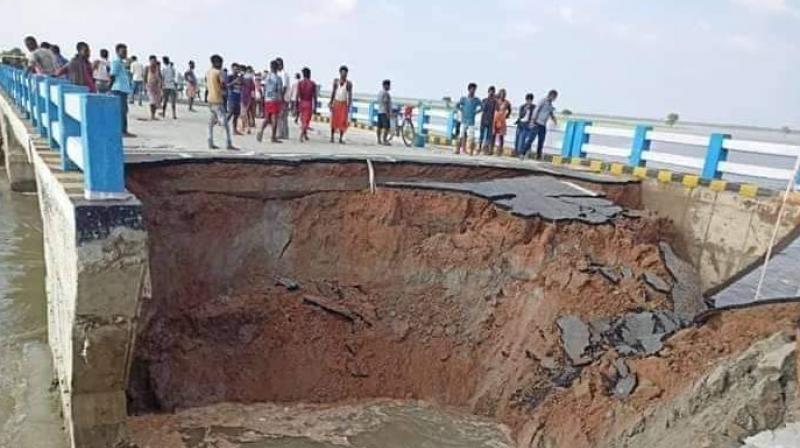 Patna: An approach road for a new bridge connecting Gopalganj to East Champaran in Bihar, opened only last month, was washed away by the Gandak river, which is in spate, leaving the opposition and the ruling dispensation in the state at each other’s throats.

Sharing an image of the caved-in portion of the road on his Twitter handle, leader of the opposition Tejashwi Yadav demanded the resignation of Chief Minister Nitish Kumar, who had inaugurated the Sattarghat bridge on June 16.

The bridge, constructed at a cost of over Rs 100 crore and over a period of eight years, is more than a km long.

The state government, however, quickly came out with a clarification that it was not the bridge itself that had collapsed.

The Road Construction Department issued a statement, saying the caved-in portion of the road was situated "two kilometres away from the bridge" and that it was the approach route for an 18-metre-long causeway that leads to the Sattarghat bridge.

"The causeway, too, is intact. The damage to the road is not the result of any defect in construction but due to increased water pressure on the Gopalganj side. The road will be made ready for traffic as soon as the floods subside," the statement said.

Nonetheless, images of the damaged pathway had gone viral on social media since the previous day.

The RJD leader shared the image, advertising it as a failure of the government since the chief minister had inaugurated the bridge, connecting Gopalganj to East Champaran.

The ruling JD(U)-BJP combine hit back at the RJD leader.

“Don''t you understand the difference between a bridge and an approach road? Despite being the leader of the opposition, you come up with such irresponsible statements", Neeraj Kumar fumed at Yadav.

As per the state disaster management department, both Gopalganj and East Champaran are among a total of eight flood-affected districts in the state.

A total of 2.18 lakh people across 137 panchayats have been affected by the floods caused by heavy rainfall, upto 45 per cent above normal, in the catchment areas of neighbouring Nepal where rivers like Gandak and Kosi originate.

As of now, 3,676 people residing in badly hit areas have been evacuated. 2,731 put up at relief camps while more than 15,000 people were depending on 29 community kitchens set up for feeding those affected by the calamity.