India   All India  17 Jul 2019  Nature’s delicate balance is upset and no one but us can restore it
India, All India

Delhi is facing a huge shortage of drinking water — to the tune of 300 million gallons a day and the tanker water mafia is thriving. 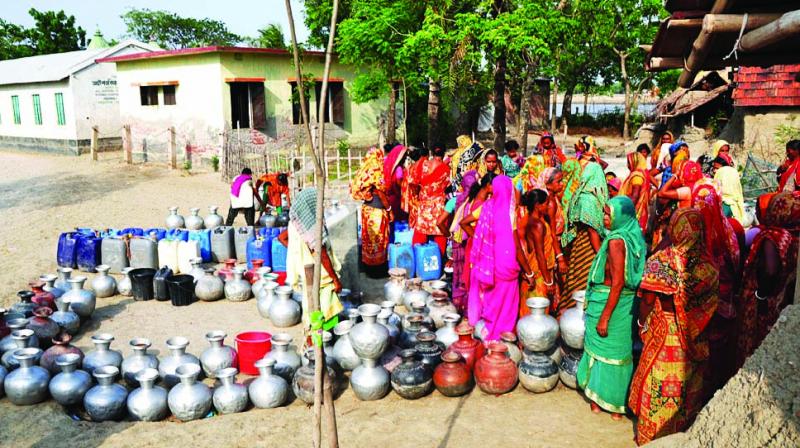 The water mafia is ruling places plagued by crisis.

Ten years ago, in 2008 I remember taking my nephew to watch Wall-E, and thinking it was a wonderfully scripted and executed piece of fiction for children. Today in 2019 I am not so sure of the fictional nature of this story. It tells of the last little robot, waste allocation load lifter, who is left on a deserted earth that no longer has any plants, water or oxygen. He discovers that Eve, a sleek probe, is on earth on a scanning mission and she has the last plant tucked away in her system. Meanwhile, the people of Earth are on a large space cruise ship, having evacuated Earth 700 years earlier. Their bodies have low bone density and they are all obese, moving in hover-craft chairs and constantly on a feed of TV and video chatting.  Sounds familiar?

Forget popular culture, forget pulp fiction, natures delicate balance is upset and there is no getting away from it. Instead of looking for alternative planets to inhabit, why don’t we at least try to fix the one we are living on? There is a water crisis across India and a heat wave in Europe. With the polar ice caps melting, it is leading us to prolonged droughts, changing vegetation patterns, floods and tsunamis have erased entire islands in other regions, volcanoes in Indonesia and other parts of Asia. All this has not happened overnight but due to consistent neglect and degradation. Fire and Brimstone outcries alone will not do — civil society and government need to act in tandem to avert Day Zero.

The doomsday clock is on and the prediction is that by 2040, the world will no longer be inhabitable. The very air we breathe will no longer be breathable, the water we so desperately need to survive will be in severe shortage if not altogether gone and the earth will no longer yield its bounty. We are perhaps the only species that produce toxic waste and deplete the natural resources of the planet at a rate that is higher than which earth can renew it. We are the ones to blame for the current condition of the planet and there is no escaping that basic fact.

Without this delicate balance, mankind could no longer thrive. Indeed, without the balance of creation, man would cease to even survive. Through our acts of
greed and indifference, we have upset the balance. We humans are at a crossroads. We still have the power to restore balance.

Looking closely at India alone we can see that the water crisis is often attributed to lack of government planning, increased corporate privatization, indiscriminate dumping of industrial and human waste and government corruption. The failure to maintain natural aquifers and groundwater resources is at the root of the cause. With its large population India has stressed planned water resources and often rural areas are left out. In addition, rapid growth in India’s urban areas has stretched government solutions, which have been compromised by over-privatisation.

Delhi is facing a huge shortage of drinking water — to the tune of 300 million gallons a day — and the tanker water mafia is thriving. Put simply, the mafia illegally taps into bore-well water and sells it at a pretty price to people in dire need of drinking water. The Delhi Jal Board is not able to meet the demand of the thirsty millions and as a result the water-mafia is flourishing by tapping on the quickly depleting levels of groundwater through illegal bore-wells.  Meanwhile politicians are busy taking photo-ops or attacking and abducting journalists who try to report on this dire situation.

Take the example of Chennai which is currently paying the price for its absolute disregard for water-bodies and water sources. Chennai and its two neighbouring districts — Kancheepuram and Tiruvallur — together used to be called “Yeri (lake) districts”. They had more than 6,000 lakes, ponds and reservoirs that minimised run-off loss of rainwater and kept replenishing the groundwater table throughout the year. At present, authorities say only 3,896 have survived and Chennai city alone has lost nearly 150 such water bodies.

With no rain catchment programs in place, most of the water is displaced or dried up instead of used. In these areas, rain harvesting could be one solution for water collection. Collected water can be immediately used for agriculture, and with improved filtration practices to reduce water-borne pathogens, also quickly available for human consumption.

In Vellor district there is a small ray of hope in this dark and gloomy scenario. Once again re-enforcing the faith in citizen led initiatives, a group of 20,000 women have resuscitated the dead Naganadhi River in Vellore. Now you may ask, how does one resurrect a dead river? By manually digging and reviving 3,500 recharge wells and 210 bounder damns across ten blocks across the district. These wells and bounder damns feed into the river restoring it and not just that, but raising the water table as well. With a budget of just 5 crore, these remarkable women under the MGNREGA scheme have restored the river that is now the primary source of fresh drinking water and irrigation for the paddy fields.

Another success story comes from Pauri Garhwal in Uttarakhand where hundreds of villagers, encouraged by the children are constructing reservoirs of various sizes for rainwater harvesting. These citizen-led drives are definitely an indicator that one does not need huge budgets to solve India’s water crisis but some DIY (do it yourself) schemes, like the one adopted by the man Dayanand Krishnan in Chennai who built his own rainwater harvesting system. It helped him save over 200 liters of water in just 10 minutes! The entire system cost

Krishnan only Rs 250. I would say to all those fancy multinationals with their big budgets, here go crunch these numbers!

The truth is that we just need to change our patterns of behaviour and the planet will be restored to its balance. We need to give up on plastic. We need to cut back on our carbon emissions. Save rainwater, eat produce that is in season. We need to reduce the amount of toxic waste that is dumped in our waters. Let the countries that are producing the waste deal with it themselves. We must plant more trees every season. We need to love our planet and in return it will love us back.