In the ICSE syllabus for Class 4 students on environment, there is a chapter on sparrows and saving them by creating nests based on Rakesh’s work. 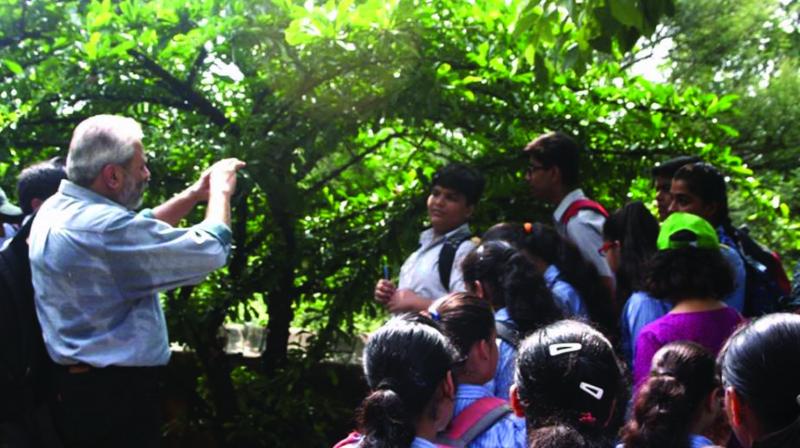 Restoring the joys of the natural world to children is naturalist and filmmaker Rakesh Khatri, who set up Eco Roots Foundation in 2012 with his wife Monica and son Animesh.

Hooked on to their i-Pads and mobile phones, children today are missing the joys of nature, wildlife and birds. In the fast changing urban milieu many children have never seen fireflies or jugnus, the shimmering, sparkling, torch carrying insects of the night that fascinated us as children. You ask a group of school kids to name five birds they have seen or know about and after crows and pigeons many are stuck for options. Even the croaking frogs that herald the monsoons are a rarity for them.

Bringing back the joys of the natural world to children is Rakesh Khatri, who set up Eco Roots Foundation (ERF) in 2012 with his wife Monica and son Animesh. A naturalist and a filmmaker, he has spent three decades spreading awareness on building a sustainable future. Passionate about saving birds, conserving water and understanding climate change, he has inspired people across the country, especially children through workshops, nature walks and theatre.

In 2013, Rakesh was honoured with the International Green Apple Award in the House of Commons in London for his work on saving sparrows, whose population was shrinking drastically not just in India but across the world because modern, multi-storeyed buildings made it difficult for the common house sparrow to build its nests. To counter the decrease in nesting areas for sparrows he started designing eco-friendly sparrow nests that children and adults can make and place around their homes.

ERF conducted more than 1500 workshops and built 32,000 sparrow nests, made of jute, wood and other recyclable material, and established them in major cities including Delhi, Lucknow, Bangalore, Mumbai, Hyderabad, Jaipur etc. He has even taught widows how to make birds’ nests so that they stay engaged and earn some pocket money.

“I love the enthusiasm of school children and this has helped me to develop new concepts on active learning and promoting Education for Sustainable Development (ESD),” says Rakesh. He has developed over 50 games on environmental issues and trained teachers of 135 schools in ESD. “Who am I ?” is an interesting game where an animal picture is strung on the back of a student and with promoting from the rest of the students who have seen the picture, the animal has to be guessed. In the course of the game a lot of interesting facts of the animal are shared with the class.  So if it’s a camel, the facts shared are: 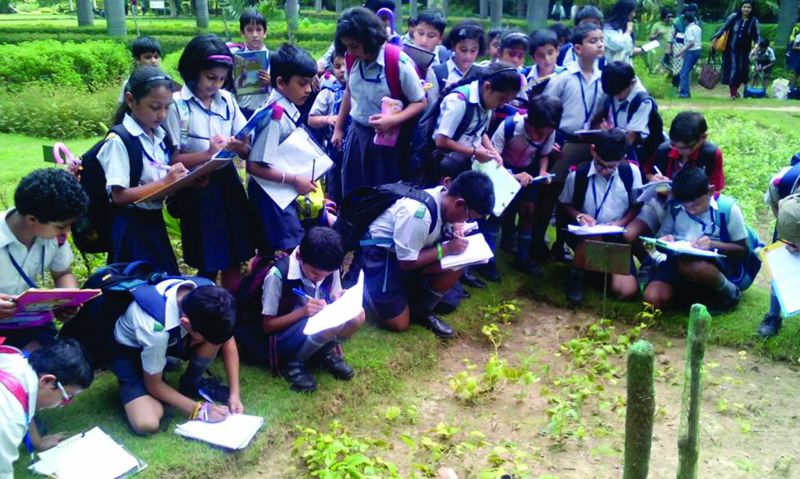 To enable children to remember birds, their distinguishing characteristics are brought out often through mimicking their walk or call. So a minha walks like a dinosaur and then he regales them about the various species of minhas. The drongo, black like a crow, is smaller and has a forked tail. In Hindi it is called a kotwal or policeman. Many of the birds build their nests from the thin twigs that fall from the neem tree.

In the beginning, even as he was honing his skills as a teacher on environment issues, he took children on a nature trail in the home of former chief minister Sheila Dikshit. Twice a week for five years, some 50 children interested in nature would walk through a trail and discover birds, insects, plants and trees. He still continues to take children on bird watching and nature trips to kindle their love for birds and nature and then nurtures it. For him, environment education is not a lecture but a discussion. He talks of plastic and electronic waste and the damage they cause. Even a dust heap on the road can set off a discussion on how to remove it. The good old bioscope and gramophone, two traditional ways of entertaining and communication, are also used extensively for bringing nature under the child’s lens.  In fact his “Green Cinema Bioscope”, designed by him, has been showcased at the department of science and technology as a tool to spread awareness on water conservation.  Rakesh makes short films on water, biodiversity, climate change and five children can see simultaneously the story being told on a big screen inside the 2.5 foot by 1.5 foot bioscope. Many children get their first glimpse of fireflies (jugnu) through a film shown through the bioscope.

In the ICSE syllabus for Class 4 students on environment, there is a chapter on sparrows and saving them by creating nests based on Rakesh’s work. Ek Kahani Pattha Boley (A Story by Leaves) is a book which is a compilation of 45 stories about wildlife which is disappearing written by children inspired by Rakesh. Another book in the offing, also in Hindi by children, is about looking for the chirping birds that are disappearing.

While sparrow revival continues to be a passion for Rakesh, Eco Roots Foundation was asked by the Department of Science and Technology to organise theatre workshops on water conservation with students. Called Neer, Naari aur Vigyan, they were held in collaboration with children from 170 schools in 17 cities. The children produced small skits related to conservation of a depleting resource and the importance of water for women and children who spend long hours in accessing it. Water harvesting and other issues related to water were conveyed through theatre.  Hopefully some of these children will grow up to be water warriors. The longest theatre on water conservation with children from June 2016 to March 2017 made it to the Limca Book of Records.

ERF has also held theatre on climate change and global warming with 240 schools from 24 cities in 12 languages. Called Prithvi Vandana, the programme reached out to 1,12,000 students, teachers and parents. In a CSR (corporate social responsibility) initiative called Green Saviours by VIOM network, ERF was the knowledge partner for environment activity at workshops in 25 locations with 3000 teachers over three months. As new environmental concerns appear, like loss of biodiversity, energy issues, plastic and E-waste, Rakesh Khatri is working on these issues with 200 schools in Delhi/NCR.

Simultaneously he is starting his theatre workshops on environmental issues with children called Azad Kudrat.