In the general election to the Karnataka Legislative Assembly held in May, 2018, BJP emerged as the single largest party with 105 seats. 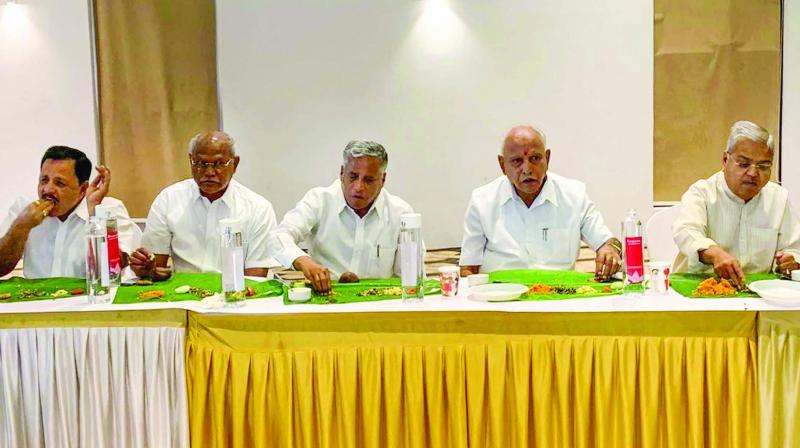 BJP state president B.S. Yeddyurappa with his party leaders and MLAs at a resort in Bengaluru.

Those watching the political developments over the past week in Karnataka are seeing clear signs of decay in our democracy. Our founding fathers who gave us this wonderful constitution must be rolling in their graves to see so many perverse minds occupying our government.

In the general election to the Karnataka Legislative Assembly held in May, 2018, BJP emerged as the single largest party with 105 seats. However, it did not have a simple majority in the House that had a strength of 224+1. The Hon'ble Governor invited the BJP's Mr. Yeddyurappa to form the Government and it was unlawful. The Governor and the BJP lawyers justified it by citing several judicial precedents. I had publicly pointed out then that all of those judicial precedents only applied if there was a free-float of MLAs that could be persuaded by the BJP to supply a majority to it; Mr. Yeddyurappa could only form a majority then by breaking up the Congress or JDS and breaching the integrity of those two opposition parties. We are glad that Mr. Yeddyurappa stepped down shortly thereafter - without breaching the integrity of the two opposition parties. Next, those two parties, the Congress-JDS coalition, that had a comfortable majority assumed power with Mr. H.D. Kumaraswamy as the Chief Minister; the political catastrophe unfolding this week is bound to send Mr.Kumara swamy packing to his house.

Why did Speaker hold resignations?

The law and procedure about a member of a legislative assembly submitting his resignation is simple and straightforward. Last Saturday, 14 MLAs belonging to the Congress-JDS coalition submitted their letters of resignation to the Speaker, Mr.Ramesh Kumar. Those resignations are yet to be accepted. The Speaker has no business to keep those resignations pending for an unreasonable amount of time; a week is an unreasonable amount of time. The Speaker is entitled to question the individual MLAs directly whether they are submitting their resignation on their own volition. If the answer to it is a 'Yes' from the MLAs concerned, the Speaker has no justification to enquire further or to substitute his wisdom for that of the MLAs that have sought to resign.

Article 190 of the Constitution that vests in the Speaker, the power to enquire whether a resignation offered to him is 'voluntary' or 'genuine' presents no difficulty. However, the Speaker says - in effect - that he should have the power to harass MLAs in the name of such an enquiry. And, in the petition lodged by 10 of those MLAs before the Supreme Court, the Speaker wants - in effect - the Supreme Court to read Article 190 in
such a manner.

Accepting those 14 resignations and the more that are expected to follow it would render the ruling Congress-JDS coalition into a minority in the House. Should the Speaker worry about it? Well, if he wishes to worry over who should or who should not form the Government, he should resign from his office. The position of a Speaker is to act in a non-partisan manner.

At this juncture, we hear a great deal about the ruling coalition wanting to impose disqualification measures under the Tenth Schedule of the Constitution upon those 14 MLAs. The Tenth Schedule of the Constitution has turned into a rogue's charter in recent years. Political parties indiscriminately lodge petitions before the Speaker seeking disqualification of their rebel MLAs and in several cases, such petitions simply gather dust and nothing more. If such petitions were also lodged against the 14 MLAs earlier but were put in a cold storage and the Speaker never bothered to take those seriously enough to issue notice to any of those 14 MLAs, the Speaker cannot be heard to say that in light of the 14 MLAs submitting their resignation, he should first subject them to past and future disqualification efforts by their political parties and, if only they do not suffer a disqualification order by him that he would consider their resignation. This is why I just called the Speaker's argument as one of sheer harassment and nothing else.

Under the Tenth Schedule, a member of the House may be disqualified - that is, removed - from the membership of the House under certain circumstances. There's a lot of idle talk on the street and Vidhana Soudha about such disqualification running for a period of 6 years or so. Not true, however!

If only an MLA is disqualified under the Tenth Schedule of the Constitution, he would be removed from the membership of the House and he would be free to contest the by-poll conducted for the very constituency that he had contested earlier. And, if he is elected in that by-poll, he would become a member of the very House for the same term that had disqualified him earlier.

I am surprised that most lawyers mindlessly talk about disqualification under the Tenth Schedule running for whatever period that comes to their mind. There is no such period of disqualification under the Tenth Schedule of the Constitution. Period. And, under Article 164 of the Constitution, a person who suffers a disqualification cannot be appointed as a Minister in the Government that occupies the balance term of the House so long as he does not contest and win another relevant election - a by poll or a seat to the Legislative Council.

Where is Anti-Corruption Bureau?

We know that those 14 MLAs were put on a private jet and herded to a luxury hotel in Mumbai. Now, whose money was expended in the process and what kind of bribe, if any, was being paid to any of those 14 MLAs to switch their loyalty? Should not the Anti-Corruption Bureau look into it? An unexplained spending by or for the benefit of a public servant could count as corruption under the laws of our country.

Let us see the Tenth Schedule more closely and we will see why it has turned into a rogue's charter in recent years. It primarily speaks of two instances when a member of the House could be disqualified. In the first case, a whip should have been issued by a political party to its member to be present in a proceeding of the House and to vote in a particular manner, the member should have violated that whip without obtaining prior permission from his party, the party chooses to not forgive him in the next 15 days and files a petition to the Speaker to disqualify him. This situation does not present any difficulty, however. The other situation is one where a member of the House 'voluntarily gives up the membership of his party'. Unfortunately, a few judgments misread that term as including dissident activity and all the mess and dysfunction we see today is traceable to those few judgments.

To begin with, the Tenth Schedule is a penal law; therefore, it should be strictly construed. That is, one should follow the plain meaning of the words therein and not expand that meaning subjectively. After all, in the longest Constitution of the world, if only it was intended to punish 'anti-party activity' or 'dissident activity' - whatever that means - the lawmakers would have said as much instead of expecting a highly convoluted and creative interpretation from the Courts. And, if only the dissident MLAs claim to have associated with the opposition to learn about or expose the corruption of their own party, all of the judgments and rulings of Speakers that hold that dissident activity is also covered by the expression 'voluntarily giving up membership of the party' would be turned upside down!

In the petition lodged by 10 MLAs, the Supreme Court has put a 'status quo' on the situation in Karnataka and much has been put to rest thereby. However, after having asked the Speaker to work overnight to decide upon the 10 MLAs resignation letters, it is unfortunate that the Supreme Court did not undertake similar burden upon itself, work overnight and finally decide upon the 10 MLAs petition immediately.  I expect that the Karnataka Speaker will lose in the ongoing case at Supreme Court.

In the coming days, should the ruling coalition collapse and it wishes to ensure that the House is dissolved and that a general election be held to the House, it could make a recommendation to such effect to the Governor. However, such a recommendation would not be binding upon the Governor. And, contrary to the BJP's gossip, the Governor is not bound to invite the BJP again to form the Government, either - even if the Governor knows that the BJP is left as the single largest party at that juncture.

If the BJP wishes to stake power, it must approach the Governor again - after the fall of the ruling coalition -and it will be within the discretion of the Governor to allow the BJP to form the Government. If the Governor chooses to allow it, no exception could be taken to such a decision, however.

Meanwhile, several ministers in the coalition submitted their resignation as ministers to their Chief Minister H.D.Kumaraswamy when in fact, such resignations should have been tendered to the Governor.

Fraudulently, they went on to transact numerous business as Ministers and have apparently indulged in rank irregularity or corruption while the people watch helplessly. You don't need a better illustration of depravity in governance.

There is widespread distress in the State, and I am deeply pained - like everyone else - at the outward action of depraved minds governing us.

I do not believe or trust those 14 MLAs in the least. But, given that we call ourselves a democracy and a democracy is about numbers, we should take note that those 14 MLAs are insisting on bringing down the H D Kumara swamy's government. As a constitutional lawyer, I would find it utterly strange if we evolve another legal doctrine to neutralize or disable them.