BJP workers were protesting his visit in the region and attacked him when he was on his way to an event. 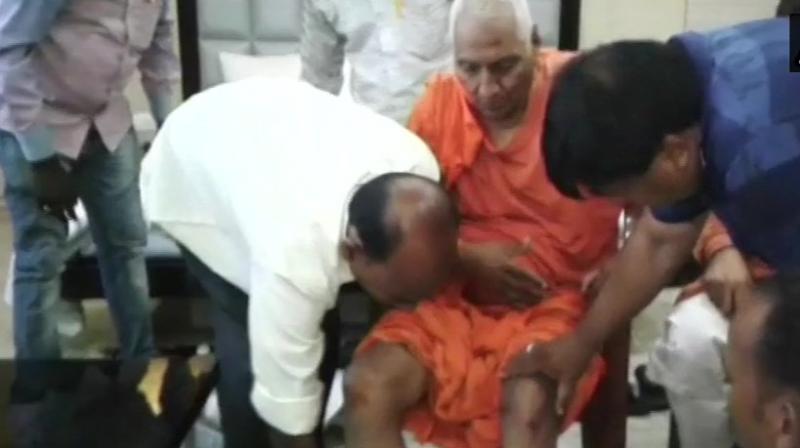 'I thought Jharkhand was a peaceful state, but my views have changed after this incident,' said the 79-year-old activist. (Photo: ANI/Twitter)

Pakur: Social activist Swami Agnivesh was attacked by a fringe group at Pakur in Jharkhand for his "anti-Hindu" stance on Tuesday. The 79-year-old activist suffered injuries.

Sources claim that local BJP youth workers were opposing his presence in the district and accused him of provoking tribal sentiment at the behest of Christians.

He was attacked by the mob as soon as he came out of his hotel. The alleged BJP workers were chanting “Jai Sri Ram” and “Agnivesh go back” as they dragged him and assaulted him on the road.

Sources said that Swami Agnivesh was injured in the attack and was immediately shifted to a hospital for treatment.

Speaking to reporters, Swami Agnivesh said, “It was a murderous attack but I survived. I still don’t know why they attacked me.”

He also raised questions on the role of local police and claimed that there was no security anywhere near the incident site even as protestors had gathered there.

According to another activist, “He fell on the ground and was beaten up badly by the mob. Some of the local people who were there tried to intervene in order to save him.”

However, the Jharkhand BJP has distanced itself from the incident and condemned the attack. Jharkhand Chief Minister Raghubar Das has also ordered an investigation into the matter.

According to the police, a probe has been launched and over 20 persons have been detained. The police have also picked up local people who had gathered outside the hotel where the incident took place.

Condemning the attack on Swami Agnivesh, the Congress party in Jharkhand blamed the BJP for harassing social activists.

Speaking on the issue Jharkhand Congress committee Chief Dr Ajoy Kumar said, “BJP workers have been using muscle power on all those who raise questions on the functioning of the government. This is not an isolated case, attacking social activists is BJP culture.”