GST is 'growing strong together', says Modi ahead of monsoon parl session

Modi asked parties and MPs to bring forth fruitful issues and make the session a successful one. 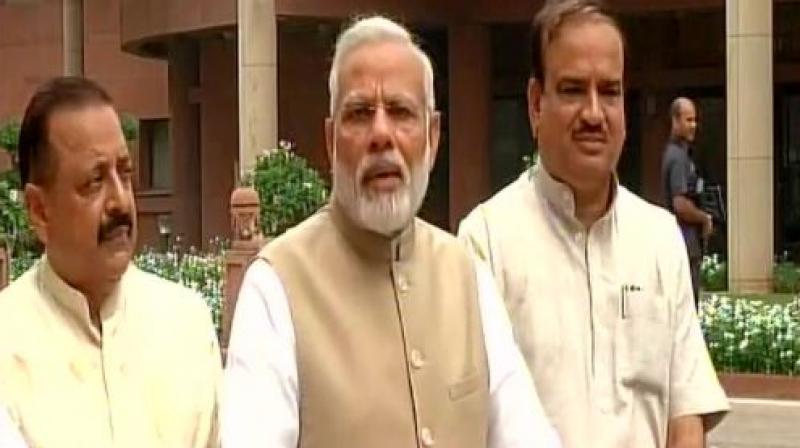 Modi said the Monsoon Session is full of excitement due to the successful implementation of GST. (Photo: ANI Twitter)

New Delhi: Addressing the media ahead of the monsoon session on Monday, Prime Minister Narendra Modi said he hoped all the parties would discuss and take decisions in the national interest, and in the spirit of the GST - Growing Stronger Together.

"I believe that all the parties, all the MPs, will take important decisions in the national interest by discussion and intention of value addition," Prime Minister Modi said.

Appreciating the introduction of the Goods and Services Tax (GST), the Prime Minister said the Monsoon Session is full of excitement due to the successful implementation of the one tax structure.

"Just like rains make soil emit a pleasant smell, similarly, the successful implementation of the GST has filled the session with a new hope and excitement," he said.

Prime Minister Modi also wished that the monsoon session moves ahead with the spirit of 'growing stronger together', same as is the other name of the GST spirit.

"This session will see the election of the new President and Vice-President," he said.

"It will also see the 75th anniversary of the Quit India Movement on August 9," he added.

The Opposition is likely to raise the issue of China, Jammu and Kashmir and Darjeeling unrest, impact of the GST and other issues in the Parliament Monsoon Session.

The Prime Minister called the session an extremely significant one in which a new President and new Vice President would be chosen.

"That is why the nation's eyes will be on this session. I am confident that all parties, all MPs will take important decisions and engage in quality debate, ensure value addition in thinking and work," he said.

The Prime Minister also expressed his gratitude to farmers who work is harsh conditions to ensure good output.

This session of the Parliament will continue till August 11.