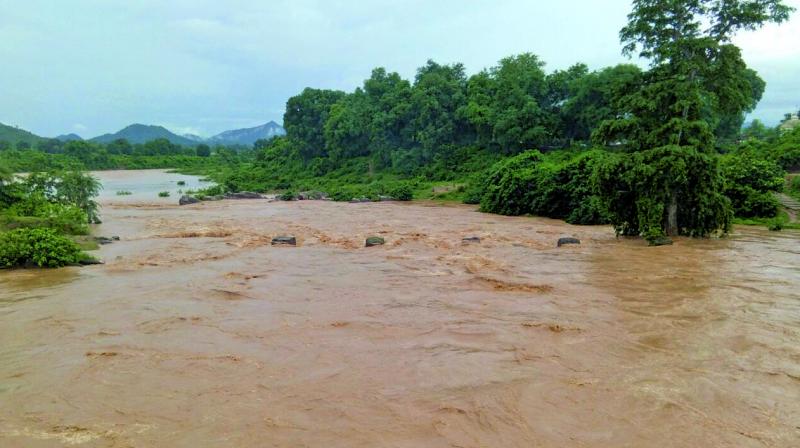 Rayagada/Bhubaneswar: Flash floods in southern Odisha districts of Koraput, Rayagada, Gajapati and Malkangiri on Sunday caused severe inundation of human habitations and extensive damage to crop lands, even as the state government urged the Union government to provide four choppers to carry out relief and rescue operations.

Reports received in the evening said that responding to the state government’s request, Indian Air Force had agreed to send four helicopters on Monday.

According to official sources, two rivers in Rayagada district – Bansadhara and Nagabali – were in spate and the situation was likely to aggravate in the next few hours as rains were still on as this report was filed.

At least 14 persons who were either trapped or stranded on rooftops were rescued by Odisha Disaster Rapid Action Force (ODRAF) and local people. No casualty report has been received yet.

Chief minister Naveen Patnaik convened an emergency meeting at Special Relief Commissioner’s office to review the flash flood situation in Rayagada district that has been the worst hit in the disaster. Rains lashed many places in the district since Saturday evening.

Villages under Kalyansinghpur block in Rayagada district were completely cut off. The roads and villages were submerged in flood waters. The water level in the Nagabali and Kalyani rivers rose due to heavy rains.

“State control room in SRC office is tracking the situation closely while Indian Army representatives and Indian Air Force helicopters are being mobilised. District collector is in charge of the situation,” said chief minister Patnaik.

The CM added that no effort would be spared to ensure the safety of people.

SRC Bishnupad Sethi informed that keeping in view the Met department forecast of heavy rainfall in southern Odisha, the government had already alerted administrative officials of all the flood-prone districts.

“Two bridges have been washed away in Rayagada district leading to disruption of communication. Hence, we have requested for deployment of four helicopters of Indian Air Force for air-dropping of relief materials in the district,” said SRC Mr Sethi.

The state government ordered closure of all schools for the next three to four days while hostels of residential and ashram schools would remain open for students staying there.