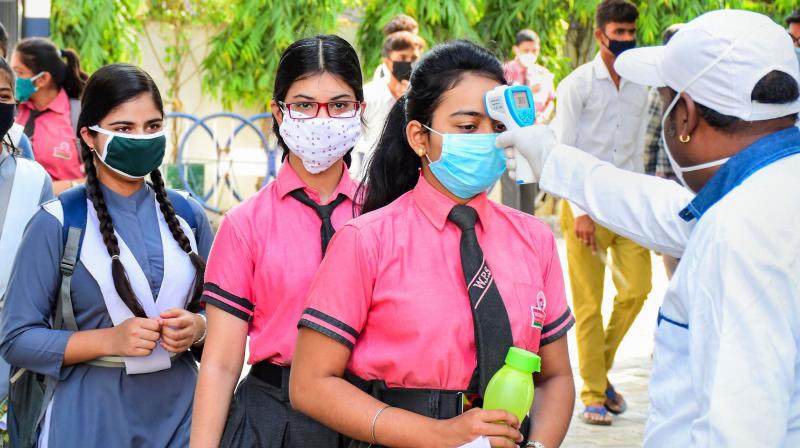 The board has decided to declare the results for class 12th by July 31, 2021. (Photo: PTI/Representative)

New Delhi: The Central Board of Secondary Education (CBSE) panel on Thursday submitted before the Supreme Court its evaluation criteria for awarding grades or marks for class 12th examinations. The board has decided to declare the results for class 12th by July 31, 2021.

The 13-member panel, set up by the board, submitted its report after the board examinations of class 12th and class 10th were declared cancelled in the view of the ongoing pandemic.

Attorney General KK Venugopal told the apex court that there may be a moderation committee to "look into the difference in marking mechanism adopted by various schools to put all students" as far as the awarding of final marks for class 12th is concerned.

He further added that each school has to form a result committee to consider the marks of students obtained in the three examinations which would be vetted by the moderation committee of the CBSE.

Venugopal also said that those students who are not satisfied with the marks/grading through the present mechanism can do better or improve their marks by appearing in physical examinations as and when the covid situation in the country gets better or as the situation normalises or as the institutions think.

For class 10, the schools have been asked to submit the tabulated marks by June 30.

The CBSE had already cancelled class 10 board exams and announced an alternative marking policy. According to the policy, while 20 marks for each subject will be for internal assessment as every year, 80 marks will be calculated on basis of the students' performance in tests or exams throughout the year, news agency PTI reported.

The weightage in terms of maximum marks for schools which have conducted the tests and exams through the year will be -- periodic test/unit test (10 marks), half-yearly exam (30 marks) and pre-board exams (40 marks), the news agency added.

Tags: central board of secondary education (cbse), cbse board examinations, cbse board results