India   All India  17 Jun 2020  The nation is proud of martyred Indian bravehearts: Rajnath
India, All India

The nation is proud of martyred Indian bravehearts: Rajnath

The Nation will never forget their bravery and sacrifice. My heart goes out to the families of the fallen soldiers 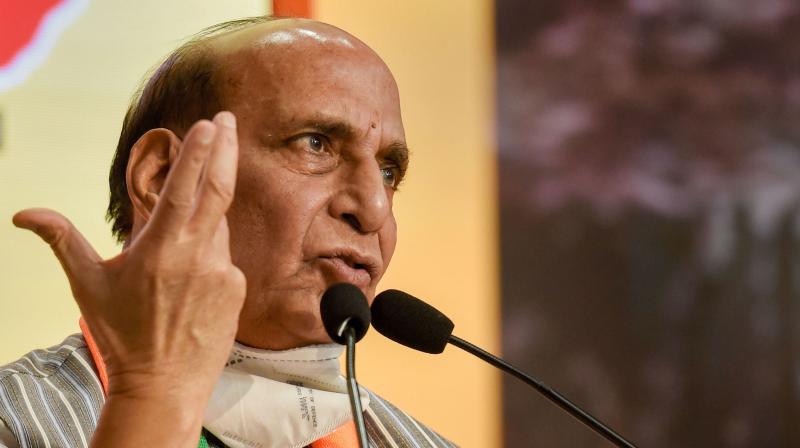 New Delhi: The loss of soldiers in Galwan Valley is deeply disturbing and painful, Defence Minister Rajnath Singh said on Wednesday, paying glowing tributes to the Army personnel who were killed in a violent clash with the Chinese Army.

The Indian Army on Tuesday said 20 Army personnel, including a Colonel, were killed in the clash on Monday night, in the biggest ever military confrontation between the two armies in over five decades.

In a series of tweets, Singh said Indian soldiers displayed exemplary courage and valour in the line of duty and sacrificed their lives in the highest traditions of the Indian Army.

"The Nation will never forget their bravery and sacrifice. My heart goes out to the families of the fallen soldiers. The nation stands shoulder to shoulder with them in this difficult hour. We are proud of the bravery and courage of India's bravehearts," he said.

Monday's clash was the biggest confrontation between the two militaries after their 1967 clashes in Nathu La when India lost around 80 soldiers while over 300 Chinese Army personnel were killed in the confrontation.

The External Affairs Ministry on Tuesday said the violent face-off between armies of India and China in eastern Ladakh was the result of an attempt by the Chinese side to unilaterally change the status quo in the region.

The ministry said both sides suffered casualties that could have been avoided had the agreement arrived earlier at the higher level been scrupulously followed by the Chinese side.

The Indian and Chinese armies are engaged in the standoff in Pangong Tso, Galwan Valley, Demchok and Daulat Beg Oldie in eastern Ladakh. A sizeable number of Chinese Army personnel even transgressed into the Indian side of the de-facto border in several areas including Pangong Tso.

The Indian Army has been fiercely objecting to the transgressions, and demanded their immediate withdrawal for restoration of peace and tranquillity in the area. Both sides held a series of talks in the last few days to resolve the row.