The IMA said all non-essential services, including OPD services, will be withdrawn for 24 hours from 6 am on Monday to 6 am Tuesday. 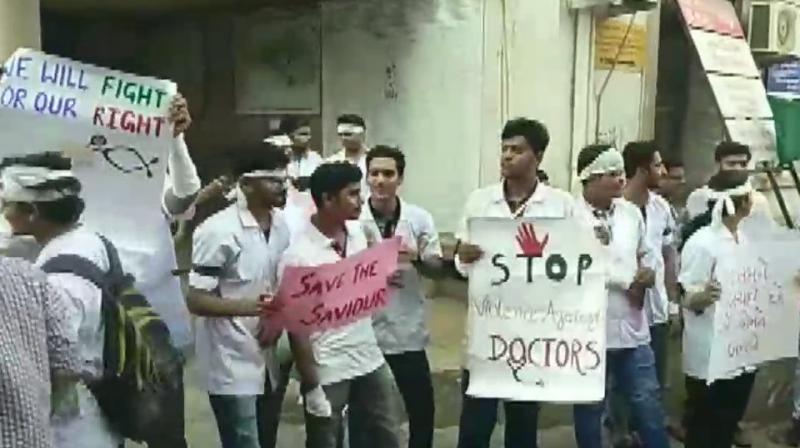 The apex medical body, IMA, however, demanded a comprehensive central law in dealing with violence on doctors and healthcare staff, and in hospitals. (Photo: ANI | Twitter)

New Delhi: The Indian Medical Association (IMA) Sunday said it will go ahead with its strike on June 17 with withdrawal of non-essential health services across the country in the wake of the recent assault on doctors in West Bengal.

The announcement came a day after Union Health Minister Harsh Vardhan asked states to consider enacting specific legislation for protecting doctors and medical professionals from any form of violence.

The apex medical body, IMA, however, demanded a comprehensive central law in dealing with violence on doctors and healthcare staff, and in hospitals. Security measures and the determinants leading to violence should also be addressed, it said in a statement. Exemplary punishment for perpetrators of violence should be a component of the central law and suitable amendments should be brought in the Indian Penal Code (IPC) and Code of Criminal Procedure (CrPC), the IMA said.

The IMA said all non-essential services, including outdoor patient department (OPD) services, will be withdrawn for 24 hours from 6 am on Monday to 6 am Tuesday. Emergency and casualty services will continue to function, it said.

The medical body had launched a four-day nationwide protest from Friday and wrote to Union Home Minister Amit Shah demanding enactment of a central law to check violence against healthcare workers. It had also called for a countrywide strike on June 17 with withdrawal of non-essential health services. On Saturday, Vardhan, along with a letter to all chief ministers, also attached a copy of the Draft Act provided by the IMA --the Protection of Medical Service Persons and Medical Service Institutions (Prevention of Violence and Damage or Loss of Property) Act, 2017.

In its statement, the IMA said effective implementation of the central law has to be ensured by incorporating suitable clauses. Nineteen states have already passed legislations in this regard and in 2016, an inter-ministerial committee’s recommendations document was signed by the IMA with the central government, the medical body said.

Hospitals should be declared as “safe zones”. Structured safety measures, including a three-layer security, CCTV cameras and restriction of entry of visitors should be well defined and enforced uniformly across the country in all sectors, it said.

“Healthcare violence has its origin in high expectations, lack of infrastructure and inadequate human resources. Issues of medical profession involving doctor-patient relationship, effective communication regarding the nature of illness and professional counselling play a part as well. “The IMA expects the government of India to provide for each of these components,” according to the statement.

The situation in West Bengal is still grave and fear of violence is present in all medical colleges and major hospitals, the IMA claimed. The violence following the attack on resident doctor Paribaha Mukherjee in West Bengal has been allowed to deteriorate into a major law and order situation, the medical body alleged. “The crisis should be resolved to the satisfaction of the residents and the medical professionals of West Bengal. IMA proclaims solidarity with the resident doctors of West Bengal and appeals to the government of West Bengal to address and resolve the issue on war footing,” the statement said.

Representatives from the IMA and Delhi Medical Association (DMA) had also called on Vardhan on Saturday.

Stressing further on the need for avoiding such incidents in future, Vardhan had said law enforcement should prevail so that doctors and clinical establishments discharge their duties and professional pursuit without fear of any violence. “Strict action against any person who assaults them, must be ensured by the law enforcement agencies,” he had emphasised. Vardhan cited a letter dated July 7, 2017 sent by the Union Health Ministry to all chief secretaries of states which contains the decision taken by an Inter-Ministerial Committee constituted by the ministry to review the issues raised by IMA. The committee, in its report, had recommended that the Health Ministry shall suggest to all state governments which do not have specific legislation to protect doctors and health professionals to consider one to strictly enforce the provisions of special legislation wherever they exist or enforce the IPC and CrPC provisions with vigour. The draft of The Protection of Medical Service Persons and Medical Service Institutions (Prevention of Violence and Damage or Loss of Property) Act, 2017, circulated to the states, includes clauses on penalty and recovery in case of loss/damage to property.

However, emergency and ICU services were not hampered in these hospitals.

Resident doctors of AIIMS and Safdarjung Hospital, who resumed work after having boycotted it on Friday, Saturday have a 48-hour ultimatum to West Bengal Chief Minister Mamata Banerjee to meet the demands of the state’s agitating doctors, failing which they said they would go on an indefinite strike.

They attended patients wearing helmets and bandages on forehead as a sign of protest.