Replying to a question, the religious leader said he had not met Singh since the latter’s defeat in the polls. 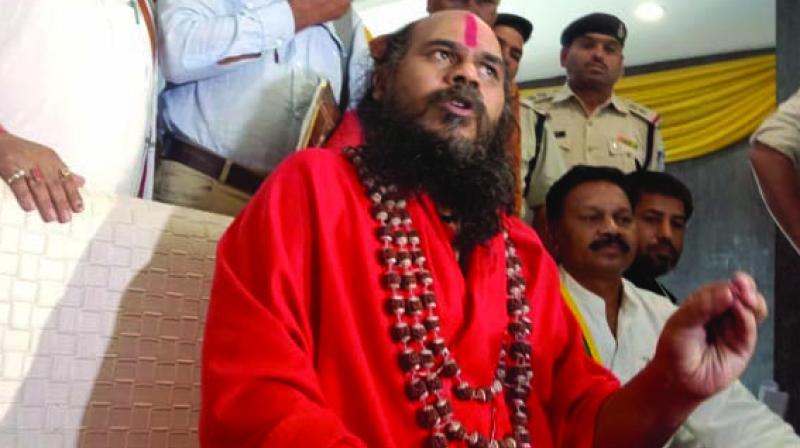 Bhopal: A high-voltage drama was witnessed here on Sunday when Swami Bairagyanand alias ‘mirchi’(chilli) Baba was taken into preventive detention by police as soon as he landed at airport here from Guwahati in Assam to carry out his vow to take ‘samadhi’ (bury himself alive) for wrongly predicting Congress heavyweight Digvijay Singh’s victory in Bhopal in just concluded Lok Sabha elections.

Policemen surrounded the self-styled god man as soon as he emerged out of airport and took him into preventive detention to deny him from fulfilling his promise to take ‘samadhi’, scheduled to be carried out in the auspicious time of 2.11 in the afternoon here.

The seer who boarded a luxury hotel here being trailed by cops later told reporters that he was forced to defer his vow to take ‘samadhi’ as the auspicious moment for this had lapsed in the wake of his preventive detention by police. “The auspicious moment for taking ‘samadhi’ passed as I was taken into preventive detention by police. I have deferred my plan to take ‘samadhi’ to June 20. I have sought permission from Bhopal district collector for this. If I am not granted permission by June 20, I will launch hunger strike,” he said.

“I still stick to my promise to commit ‘samadhi’”, he added.

Sounding apologetic for making wrong prediction, the seer said a realization had now dawned upon him that certain things such as life, death and destiny are at the hands of God and nobody can tamper with them.