Relief camps set up across states, 13 trains are cancelled. 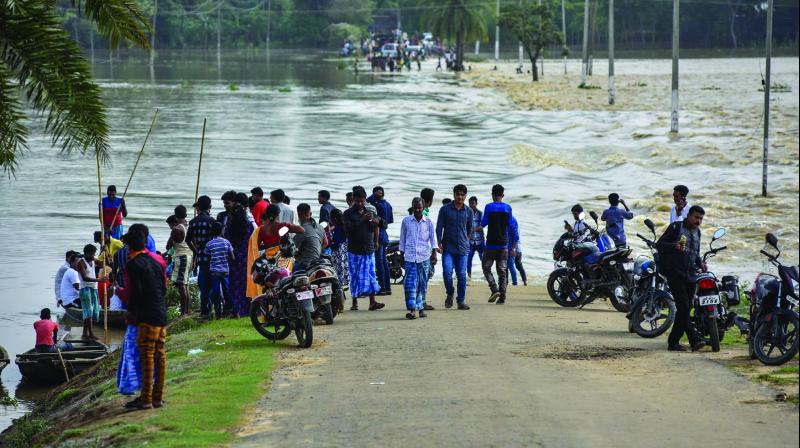 Villagers stand near a partially-submerged road in flood-affected Hojai district of Assam on Saturday. (Photo: PTI)

Guwahati: Flood situation in Assam continued to be grim with over four lakh people reeling under the flood in seven districts on Saturday.

Nearly 67,175 people have taken shelter at temporary relief camps where relief materials are being distributed by the district administrations in the affected areas. Floodwaters have also disrupted road communication at many places.

Most of the border outposts on the India-Bangladesh border were submerged by the Kushiara river as flood situation worsened in Karimganj district. More than 80,000 people in 117 villages were affected by floods in Patherkandi and Karimganj circles. Altogether 56 relief camps have been opened in the district and the State Disaster Response Force (SDRF) is evacuating people from the flood-hit areas.

“Work is in progress in the affected location. Restoration of tracks is likely to take two to three days,” Mr Sharma said.

Meanwhile, people in landslide-prone areas have been asked to move to safer places during the monsoon as fear of rain-triggered landslips was looming large.