The metro project was conceptualised as a viable solution at a time when the pressure on roadways communication is worryingly increasing. 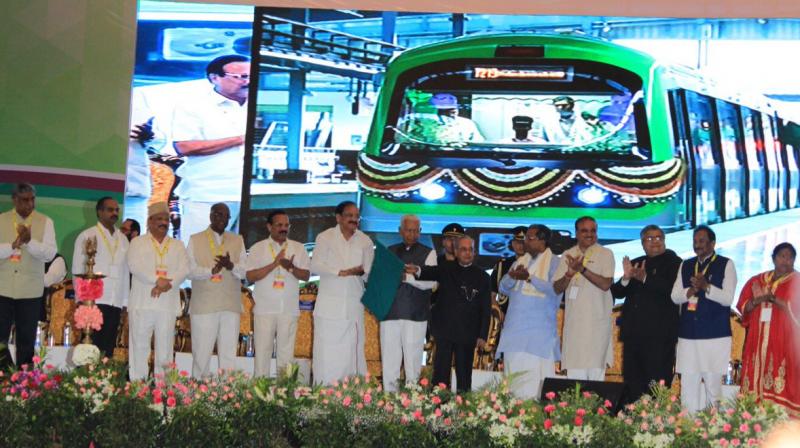 The public transport system, implemented jointly by the Union and the Karnataka governments, is aimed at providing efficient and environment-friendly transport option to the residents of Bengaluru, a city of estimated 10 million people.

The metro project was conceptualised as a viable solution at a time when the pressure on roadways communication is worryingly increasing. Also, Bengaluru has one of the worst air pollution indices among prominent cities in India. In May, the National Green Tribunal directed authorities to ensure 76 polluting industries around Bengaluru's Bellandur lake be shut.

The project - totalling 42.3 kilometre in length - was started in 2008, and 31 km have been opened in different phases in the past. The last section, measuring 11.3 kilometre was opened today. It's been built at a cost of Rs 13,845 crore.

Mukherjee, the chief guest at the inauguration, said organising transportation for large cities with population of 3-5 million is a "serious challenge" for the government.

"Urban transportation is posing a serious challenge to India's development," he said after inaugurating the service remotely from the Vidhan Soudha.

He acknowledged India was late to introduce metro "by several decades", primarily because of doubts about cost- benefit ratio, nontheless there was "no looking back" after the project first rolled out in Kolkata in 1984.

'We started with the first metro network in Kolkata in 1984 and then we started in Delhi in the year 2000," he said.

The president thanked workers and engineers who toiled to ensure the project "sees the light of the day". Praising the city, he said Bengaluru was earlier known as "Garden City Of India", and is now famous as "Silicon Valley of India".

Chief Minister Siddaramaiah said rapid economic growth has brought prosperity to the people of Karnataka, but at the same time it has strained civic infrastructure, particularly that of transport sector.

"Increasing congestion on roads, worsening air quality and related time and health issues were making the city economically inefficient", he said, suggesting that projects like 'Namma Metro' will have far reaching impact on infrastructural, economic and social aspects of a city.

"The problem of last mile connectivity has to be addressed through multiple actions such as good bus services, taxi services, user friendly pathways etc," the chief minister said.

Union minister M Venkaiah Naidu praised the "excellent work" done by everyone involved with the project.

He said the government has decided to move towards promoting "efficient" public transport systems such as metro rail to check increasing pollution in urban areas.

Naidu also lauded the cooperation between the Union and the state governments, hailing it as a "Team India" spirit.

About the city's emergence as an information technology hub, he said, "IT is the beauty of Bengaluru".

And amount of Rs 300 crore was raised by floating bonds, which is a first in the metro history of the country.

The second phase of 'Namma Metro' is already under implementation and would add another 72 kilometres to the existing network. The network, when completed, is expected to carry more than 15 lakh passengers per day.