The KMRL has also appointed as many as 23 transgenders for customer service operations and as ground staff. 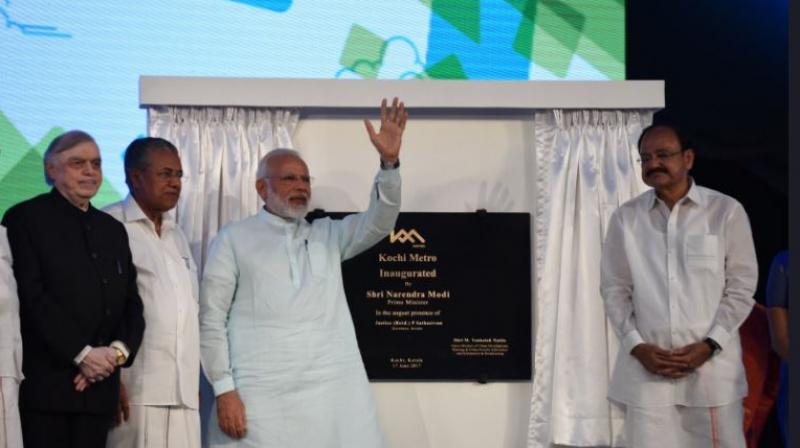 Modi said Kochi was selected as a Smart City in the first round of the challenge in January 2016. (Photo: Twitter | @narendramodi)

Addressing the inaugural function, he stressed the need to bring about a paradigm shift in urban planning by adopting a people-centric approach and integrating land use and transport.

"Mass rapid transport is the need of the hour" and added that his government is committed to improve it, Prime Minister Modi said.

"Thanks to France and Alstom, the company that made the train coaches. Coaches reflect 'Make in India' vision. They have been built by Alstom near Chennai, and have an Indian component of around 70 percent," he added.

Describing Kochi as the "Queen of Arabian Sea", Prime Minister Modi said it has become the hub of Kerala over the years.

Hailing the metro for giving chance to women and transgenders, Prime Minister Modi said 50 cities in the country were ready to take this route and the Union Government is committed to help them.

"Nearly 1000 women and 23 transgenders have been selected to work in the Kochi Metro rail system," he added.

He said the government is focused on next generation infrastructure, which includes logistics, digital and gas.

Modi further said Kochi was selected as a Smart City in the first round of the challenge in January 2016.

"I hope it will do even better in the days to come," he added.

Information and Broadcasting Minister M Venkaiah Naidu congratulated 'Metro Man' E Sreedharan for the construction of the Kochi Metro in the fastest time of four years.

Naidu said "Kochi is a smart city because of its smart people."

Naidu said Prime Minister Modi believes in 'Team India' concept and continues to focus on one thing - development. Irrespective of political affiliations, the state and Centre should work unitedly for development.

Vijayan praised Sreedharan for the work done for the Kochi Metro and said timely completion of the Metro shows mega projects can be completed on time.

Prior to the official launch, Prime Minister Modi took a ride in the metro train from Palarivattom to Pathadippalam, and headed to the stadium for the inauguration, accompanied by a host of dignitaries including Union Urban Development Minister M Venkaiah Naidu, Kerala Governor P Sathasivam, Chief Minister Pinarayi Vijayan, Leader of Opposition in Kerala Assembly Ramesh Chennithala, Ernakulam MP K V Thomas and E Sreedharan.

Following this, he is expected to attend a Patanjali yoga camp and release a book commemorating 'Reading Day'.

The Prime Minister will also chair a meeting with Chief Minister Vijayan and other cabinet ministers at 1 pm to discuss developmental activities implemented in the state.

The 13-km long stretch spans across Aluva and Palarivattom. KMRL has collaborated with Kudumbashree, the women empowerment-oriented self-help group initiated by the State Government.

The KMRL has also appointed as many as 23 transgenders for customer service operations and as ground staff.

Apart from a fleet of low-floor buses and autos plying as metro feeders, the KMRL has also roped in Kochi Water Metro, a water transport unit functioning as feeders for those living by the banks of the backwaters.

The rooftops of all stations have been set up with solar panels in order to generate power.

Apart from a special provision for wheelchairs, coaches have earmarked specially for people with disabilities. For such people and pregnant women, the Kochi metro comes fitted with cushioned seats. Also, there are multiple USB ports for commuters to charge their mobile phones on the go.

The minimum fare to ride in the Kochi Metro is capped at Rs. 10, while an end-to-end ride, from Aluva and Palarivattom or vice-versa costs Rs. 40.