He also said the forces are required to be alert in view of the myriad security challenges and in a few states. 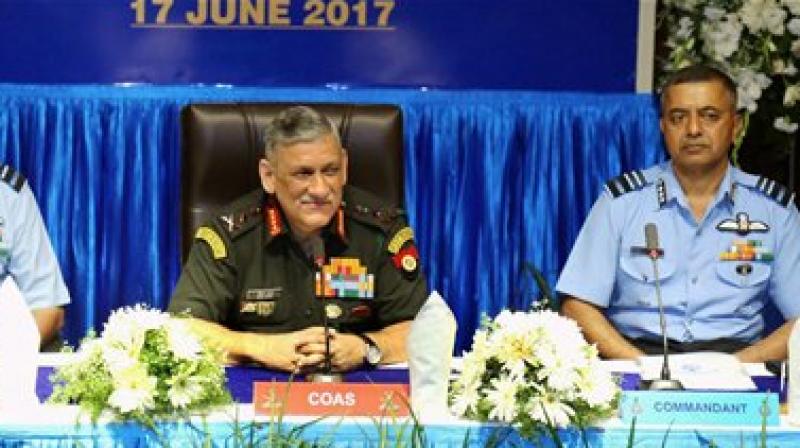 Hyderabad: Maintaining that the Army has a very good human rights record, Army chief General Bipin Rawat on Saturday said the incident of a Kashmiri man being used as a 'human shield' against stone pelters was circumstances-based and could not be made a standard operating procedure to deal with such situations.

He said "misinformation and disinformation" was being spread among the people of Jammu and Kashmir, compelling the younger generation to pick up arms against the security forces.

Commenting on Major Leetul Gogoi, who had tied the man to a jeep purportedly as a shield against stone pelters, Rawat said, "Everything and every action that we take is considering

the nature of task that we are expected to carry out under the circumstances."

"But we are concerned about human rights and we make sure rights of people are not violated," he told reporters on the sidelines of an event.

Rawat was in the city as the chief guest at the combined graduation parade, marking the completion of the pre-commissioning training of Indian Air Force flight cadets at the Air Force Academy, Dundigal.

When asked whether it (human shield incident) could be made a standard operating procedure (SOP), the Army chief said, "No...it is not...What I am saying is it is not considered...I said it depends on the circumstances. It is circumstances-based. Each one takes action based on the circumstances, but the effort is to make sure that human rights violations are not there."

On handling the situation in Kashmir wherein some school children were also seen to be part of the mob hurling stones at the security forces, Rawat said the Army follows very stringent rules of engagement in the Valley.

"They have been trained to handle such situations and when they find that there are children and women, who are coming in the front, they deal with them accordingly and harsh measures are never used. We are an Army which believes very strongly in human rights and we have a very good human rights record. We know how to deal with children and women under such circumstances," he said.

When asked about some cases of even locals and minors picking up arms and attacking the Army and security personnel, Rawat said, "There is some misinformation and disinformation which is being spread amongst the people of Jammu and Kashmir, which is causing this trouble and possibly, I would say, compelling some of the younger generation to pick up arms."

"But, I am quite confident that they will soon understand that any (such) thing that they are doing is not good for their own state and for the people," he said.

All that the armed forces and other security forces want is peace and tranquillity in the Valley, Rawat said, adding the security forces were doing a great job in bringing the Kashmir situation under control.

He said the Jammu and Kashmir situation should not be looked from the perspective of what was being projected and that the security forces were taking necessary action in the Valley.

"You should not look at the Jammu and Kashmir situation from the perspective of what is being projected. Let me tell you the security forces and all other agencies are doing a great job to bring the situation under control," he said.

"Some parts of South Kashmir are indeed troublesome, but necessary actions are being taken to ensure that the situation there is fully brought under control. Therefore, I think there should not be any cause for worry for anyone," he said.

"We all are looking at bringing peace and tranquillity and I am quite sure that some of the young people, who should be having books and computers in their hands and preparing for exams for entering the IITs and IIMs, will soon be brought on the right side of the fence and they will themselves understand that they were not choosing the right path," the General said.

Rawat said he was quite confident that the situation would be brought under control.

When asked how Army viewed 'political' comments against it, he said, "Armed forces do their work and task. We do not care about other things."

Asked if the situation was deteriorating in the Valley with each passing day, Rawat said, "..well, not really. We are there to make sure the situation is brought under control. Therefore, I think at the present juncture we have to continue with the task in the manner in which we are carrying on."

Earlier in his address after reviewing the parade, Rawat said the defence forces in India have an impeccable track record.

"Today we command respect in all walks of life and that is because we have always successfully served the nation against external threats, internal disorders, during natural calamities or in rescue missions. Internationally also, we have been praised for our professionalism, courage and patience during deployments for United Nations-sponsored peace keeping missions in the most difficult and volatile places in the world," he said.

He said the defence forces are required to be always alert in view of the myriad external security challenges and law and order situation in a few states.

"The advancement in globalisation and technology is changing the way wars are being fought. Moreover, these technologies are not only available to our adversaries, but also available to non-state actors too," he said.

Stating that integrity was the foundation of military profession, the Army chief said, "Without it, we may lose the trust of the society. In case the society does not trust its defence forces, it will be difficult for the nation to maintain its military and protect itself. In this context, integrity includes honesty, truthfulness, reliability, impartiality, sincerity and courage."

The Army chief conferred the 'President's Commission' to 120 graduating trainees of various branches, including 25 women trainees.