India   All India  17 May 2019  Row erupts in Valley as UGC bars students from joining PoK institutes
India, All India

The AICTE asked the J&K government to persuade students not to enrol themselves in any institution in PoK. 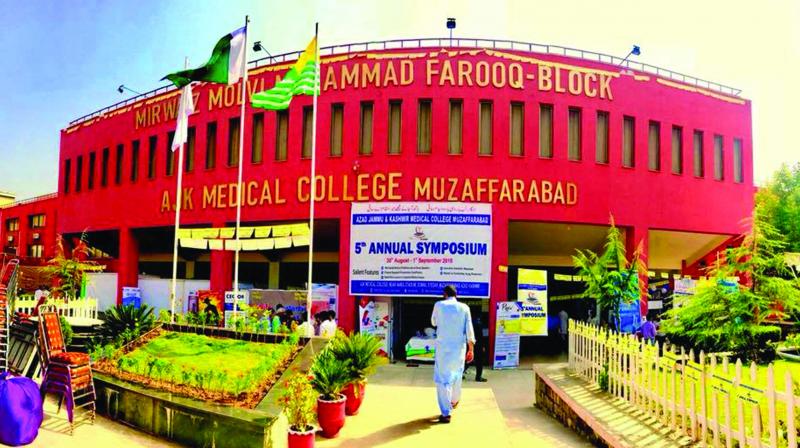 Srinagar: Academicians and politicians in Jammu and Kashmir have given the thumbs down to the University Grants Commission (UGC)’s diktat asking students of the state not to seek admissions in professional colleges in Pakistan-occupied-Kashmir (PoK). They have questioned the move on the premise that politics should not be involved in academic matters nor should bitter relations between India and Pakistan come in the way of students choosing better options to pursue their careers.

The UGC, through a recently issued advisory, has asked students to refrain from taking admissions in PoK professional colleges and other educational institutions, saying the territory is an integral part of India and educational institutions there have neither been established by the government of India nor are these recognised by it or the country’s other statuary authorities such as All India Council for Technical Education (AICTE) and Medical Council of India (MCI).

Rajnish Jain, secretary UGC, said, “Students are cautioned and advised against taking admission in any college, university or technical institution in any territory under illegal occupation of Pakistan, including the so-called AJK and Gilgit Baltistan which are not currently recognised in India.”

Separately, the AICTE asked the J&K government to persuade students not to enrol themselves in any institution in PoK. The council in a letter written to J&K’s Higher Education and General Administration departments said, “The ministry of external affairs and AICTE have discussed the cases of 25 students. It is requested to advise students studying in AICTE-approved institutions, state government technical colleges and polytechnic colleges not to take admissions in PoK institutions for education.”

The cases of these 25 students enrolled in PoK institutions had earlier reached the Indian High Commission in Islamabad for attestation. A report from Islamabad said that in view of the India’s reservations, they have since been shifted to various educational institutions in Pakistan “so that they don’t face any problems in future”.

The UGC advisory and the AICTE’s writing a formal letter to the J&K government asking it to dissuade students from heading for PoK to pursue their studies have raised eyebrows in the state. “I fail to understand why such a diktat has been issued. There’s no ban on choosing a place in anywhere in the world deemed better by the children of our country to pursue their studies. Why are then Kashmiri students being denied such a choice?” asked former lawmaker and CPI(M) leader Mohammad Yousuf Tarigami.

He said, “No doubt, we have differences with Pakistan. Also, our relationship has been plagued by hostility and suspicion, a situation which has fed vested interests of politicians in power in the two countries. But politics should be kept out of education.”

He asserted, “India should have appreciated the initiative of Pak government to provide admissions to Kashmiri students in professional institutions as it is New Delhi which has been accusing Islamabad of imparting arms training to Kashmiri students.” He sought the Central government’s intervention on the issue and said that the AICTE authorities “must be stopped from issuing such meaningless, illogical and narrow-minded diktats”.

Some educational experts too have termed the government’s directive as unwarranted and said that it tantamounts to politicising education. “Such directions negate the basic principle of SAARC cooperation, where both India and Pakistan are signatories, said G.N. Var, chairman of Private Schools Association of Jammu and Kashmir.

Mr. Var also sees in the move an attempt to portray PoK as a different place, which, he says, is politically incorrect.

He pleaded, “Since PoK has got some good professional institutions, it should be left to students to take admission wherever they like. The AICTE directive will mar the career of hundreds of students.”

Six per cent of medical seats are reserved for students of J&K in PoK medical colleges. On an average, about two dozen students from J&K are granted admissions in these colleges annually.

Roughly more than 250 students from J&K are currently pursuing studies in Pakistan under scholarship program for SAARC students and other schemes. Also, scholarships are offered for MBBS and engineering seats to J&K students — mainly the wards of “victims of violence” — under various schemes of the Pakistan government.

However, National Investigation Agency (NIA) had in its chargesheet on alleged terror funding  claimed that Pakistan is offering scholarships to Kashmiri students “in order to prepare a generation of doctors and technocrats in Kashmir who will have leanings towards Pakistan”.