India   All India  17 May 2018  The strange world we live in: Psychological warfare, politics in the age of Facebook, AI
India, All India

The strange world we live in: Psychological warfare, politics in the age of Facebook, AI

It was the way that the Soviet Union managed to “influence” Indian politics. 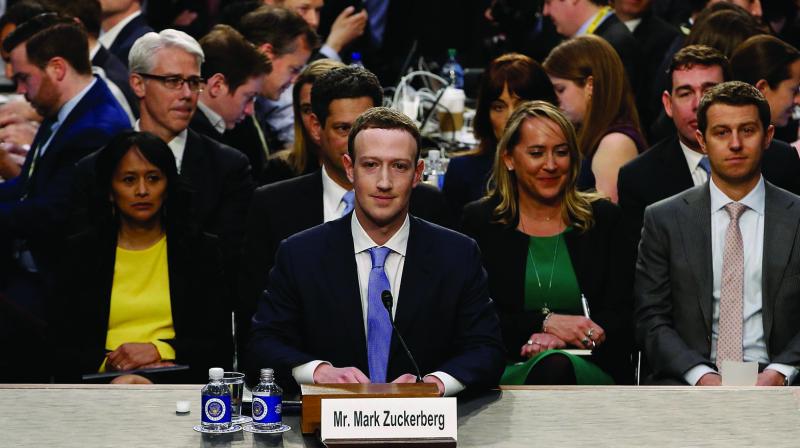 In this file photo, Facebook CEO Mark Zuckerberg arrives to testify before a House Energy and Commerce hearing on Capitol Hill in Washington, about the use of Facebook data to target American voters in the 2016 election and data privacy. (Photo: AP)

Do you remember the book The Mitrokhin Archive II, written by a former KGB defector Vasili Mitrokhin, some 15 years back? It stated that India was “the model of KGB infiltration of a Third World government with scores of sources throughout the Indian government, in intelligence, counter-intelligence, defence and foreign ministries, the police...”

According to Mitrokhin: “The agency had so many agents and sources that the then KGB chief Yuri Andropov turned down an offer by an Indian Cabinet minister for a payment of $50,000 in exchange for information. Suitcases of cash were sent to the then Prime Minister Indira Gandhi for her party’s war chest, not to mention vast sums of money funnelled to the CPI.”

It was the way that the Soviet Union managed to “influence” Indian politics.

Is today’s “influencing” less crude? No, but it is done using social media and its tool, Artificial Intelligence (AI).

In recent weeks, Facebook has been in the news for the wrong reasons. British company Cambridge Analytica is said to have obtained users’ data from the social media service.

Brittany Kaiser, who worked with the company at Cambridge provided evidence of Analytica’s wrongdoings during a hearing in the British Parliament; she said that Cambridge Analytica or its partners extract data from the social media. She believed that the number of people whose Facebook data may have been compromised is likely to be higher than the widely reported 87 million.

Cambridge Analytica obtained data through a personality quiz app designed by researchers: “Applications were designed specifically to harvest data from individuals,” she said.

It is indeed not new that politicians and countries have tried to influence their opponents (or sometimes their friends) by using unethical means in order to promote their own interests.

This is what the Chinese People’s Liberation Army calls the Psychological (or Influence) Warfare. The novelty is just the “digitalisation” of techniques.

“Influencing” (or spying) is not limited to social media.

China reacted immediately via the Global Times: “The negative propaganda against China recently released by the Indian Army on social media violates the will of both Chinese President Xi Jinping and Indian Prime Minister Narendra Modi who are seeking to bring Sino-Indian relations into a stable phase.”

Hu Shisheng, director of the Institute of South and Southeast Asian and Oceania Studies in Beijing, told the Chinese tabloid: “The allegation of Chinese hacking of Indian users’ personal data could also be a way for the Indian Army to boost their budget.”

It indeed looks like a well-planned campaign and India needs to be aware that this could be a well-thought military doctrine, elaborated in the name of the Psy Warfare.

Let us look at examples from elsewhere in the world. According to a new book Silent Invasion: How China is Turning Australia into a Puppet State, written by Clive Hamilton, professor of Public Ethics at Charles Sturt University in Australia: “Thousands of agents of the Chinese state have integrated themselves into Australian public life — from the high spheres of politics, academia and business all the way down to suburban churches and local writers’ groups.”

Hamilton alleges a systematic Chinese government campaign of espionage and influence peddling; he said that it includes “billionaires with shady histories and tight links to the (Chinese Communist) party, media owners creating Beijing mouthpieces, ‘patriotic’ students brainwashed from birth, and professionals marshalled into pro-Beijing associations set up by the Chinese embassy.”

A group of 27 Australian scholars recently published an open letter stating that the fact that the Chinese Communist Party is exercising its influence in Australia is unacceptable; they warned against using racism in the debate. The open letter included a list of espionage activities that the Australian government needs to be aware of.

Similar stories occurred in the United States, New Zealand, Europe and China too.

During the 13th NPC, Beijing unveiled a massive plan to further assert the Communist Party’s control over economic and foreign affairs, cultural policies, and the appointment and training of cadres.

The South China Morning Post observed: “The party’s influence has grown under President Xi Jinping, in line with his slogan ‘the party leads everything’, reversing past practice of leaving policy implementation to the state.”

During the recent NPC, deep reforms were announced. One should be noted — the united front work department, which has been given an increased importance, taking over the state council overseas office, the National Ethnic Affairs Commission and the state administration for religious affairs. Observers expect that it will translate into a tighter control over religion and ethnic issues, particularly in Tibet and Xinjiang, and a renewed “influence” policy abroad, the UFWD being the coordinating agency.

It is not that China is not peeping into the life of its own people. While some in India are complaining about the Aadhaar card system (and the Supreme Court is looking into the issue), China is shamelessly “spying” on its citizens.

On April 17, the Chinese President called for efforts to fully implement a holistic approach to national security and “break new ground in national security in the new era”. It is a euphemism to keep a tab on every citizen.

Speaking at the first meeting of the National Security Commission,

What does this translate into?

Apart from the introduction of AI in all domains of life (with “facial recognition” for example), the Chinese state encourages citizens to denounce their neighbours.

On April 10, Beijing Evening News announced that the local public security bureau was rewarding citizens who offer information about suspicious spying activities: “Nearly 5,000 reports from people from all walks of life and people outside China in the past year, providing important support for national security agencies to conduct in-depth legal investigations and effectively fight against espionage crimes.” The newspaper gave the names of the “winners”.

But it is not only about spies; take the “toilet revolution”, the new buzzword in China. Xinhua recently reported: “Tourists may be very surprised when they walk into a toilet and are greeted with piped-in music and decorations, including green plants, and even a smart management system.” But because toilet rolls get stolen, “some municipal governments have sought help from technology to deal with this problem.”

To enter the loo, facial recognition is required.

In the years to come, will we have to live with this type of intrusive “intelligence” technology? Yes, and they will probably extend to all domains, including defence.

It is vital for India to watch (and learn) from these developments that are bound to have repercussions on our lives in the future… and India’s relations with Beijing.

Are we not living in a strange world?

The writer is based in South India for the past 42 years. He writes on India, China, Tibet and Indo-French relations.