In the photo, Aishwarya is donning an orange and gold sari as she looks at Tej Pratap, who is clad in a white kurta-pyjama. 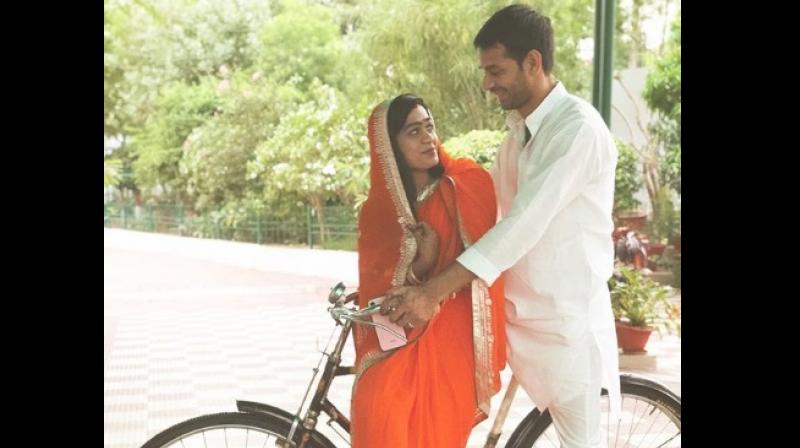 The photo of the newly-weds has garnered over 6,500 likes since Wednesday. (Photo: Instagram screengrab)

Patna: Last week, Tej Pratap Yadav, son of former Bihar chief minister Lalu Prasad Yadav, tied the knot with Aishwarya Rai. And now, after their grand wedding, a picture of the couple has appeared on Instagram where the two of them are seen smiling at each other while sitting on a bicycle.

In the photo, Aishwarya is donning an orange and gold sari and she has covered her head like a bride, as she looks at Tej Pratap, who is clad in a white kurta-pyjama.

The photo of the newly-weds has garnered over 6,500 likes since Wednesday.

Many of the comments are seem to be from Tej Pratap's supporters who refer to him as "Tej Bhaiya". One comment said the bicycle proves that Tej Pratap is the "protector of the poor".

The wedding of Tej Pratap was solemnized at the sprawling Bihar Veterinary College ground in Patna on Saturday in the presence of several opposition party leaders and dignitaries.

Aishwarya Rai is the daughter of a former minister and six times RJD MLA Chandrika Rai.

Ahead of the main wedding event, a poster depicting Tej Pratap Yadav and Aishwarya Rai as Lord Shiva and Parvati had raised eyebrows.