Triple talaq not an issue of majority vs minority: A-G

'It is intra-community struggle between men and women because men are more resourceful, earner and educated,' the AG said. 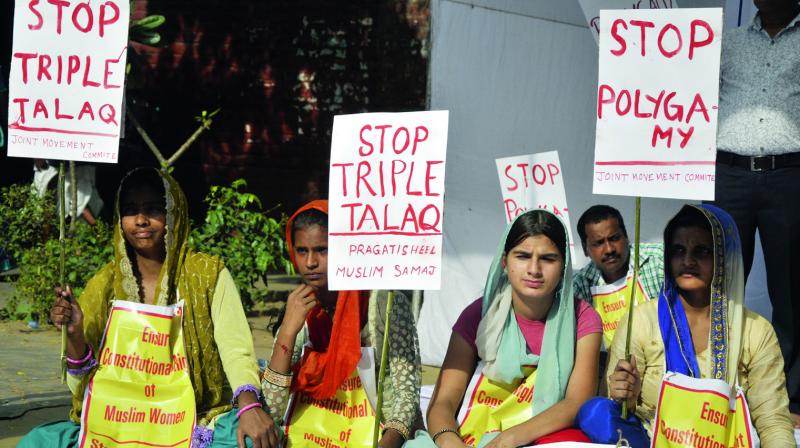 New Delhi: Attorney General Mukul Rohatgi on Wednesday told the Supreme Court that the issue of ‘triple talaq’ should not be seen as discrimination between majority and minority communities or the majority forcing its views on minority.

The AG strongly pleaded before a five-judge Constitution bench of Chief Justice JS Khehar and Justices Kurian Joseph, Rohinton Nariman, Uday Lalit and Abdul Nazeer for abolition of ‘triple talaq’ form of divorce. Wednesday was the fifth day of hearing of a batch of petitions, challenging the validity of triple talaq.

The court had earlier taken suo motu cognisance of the issue and later several petitions were filed.

In his reply, the AG rejected the arguments of senior advocate and Congress leader Kapil Sibal, appearing for the All India Muslim Personal Law Board that the court should adopt an ‘hands-off’ approach on triple talaq issue as it would amount to the majority forcing their views on the minority community.

Rejecting the charge, the AG said “It is a tussle between haves and have-nots within the system. It is intra-community struggle between men and women because men are more resourceful, earner and educated." It is the duty of this court to step in and put a final end to the practice, he added.

When Justice Kurian Joseph asked the AG whether `personal law’ based on faith and scriptures can be tested by the court, the AG said if personal law is in violation of the fundamental rights then this pernicious practice must go. When Justice Joseph asked whether the court which had taken suo motu cognisance can return the reference without answering it, the AG said the role of the Constitutional court is to test it under Article 25 (right to religion).

The CJI told the AG “the AIMPLB tells us don’t get involved in the thicket as different people say different things. When the government has not enacted a law for over 60 years, why should this court interfere.”

The AG said “we are a secular democracy. If the practice in a religion is not in accordance with fundamental rights and if there is a conflict between personal law and constitutional rights, then the court should step it.”

Reiterating the NDA government’s stand that all the three forms of triple talaq should beg struck down as unconstitutional, the AG said that if the practice is not present in 25 Islamic countries then it can’t be said it is essential to Islam. When  CJI wanted to know whether the issue of faith of religious faith has been struck down by the courts, the AG submitted that once Sati and Devdasi etc were part of Hinduism and both were set aside. If triple talaq is set aside there will not be any vacuum as the government will enact a legislation on Muslim divorce, he said.

Mr. Rohatgi said that if All India Muslim Personal Law Board itself says that triple talaq is optional, sinful and undesirable then how can it be integral to Islam. Opposing Mr. Mr. Sibal’s arguments that court should not interfere in personal laws, the AG said that personal laws could not be violative of the fundamental rights and court has a duty to interfere.

“If not present in 25 countries, then triple talaq could not be essential to Islam. If the AIMPLB says triple talaq is sinful and undesirable, then how could it be integral to Islam?. The right (to religion) provided under Article 25 of the Constitution is not absolute.” Mr. Rohatgi said triple talaq was not an essential part of Islam and it could not be allowed to continue by the court, just because it had been in practice for 1,400 years. “Can anyone say that we allow human sacrifice just because it was practised earlier.”

Senior counsel Indira Jaising appearing for Bebak Collective submitted that Shariat law cannot be allowed to operate in India as the country owing to its secular ethos does not have separate Hindu courts. She was opposed ot `triple talaq’ as it was an extra judicial and unilateral form of divorce leaving no scope for maintenance to the distressed woman.

She said if the court takes a `hands off’ approach it will be dangerous and will have far reaching consequences for 50 per cent of the Muslim population. As custodians of fundamental rights, the court owes a duty to remove the discrimination and inequality as enshrined in Article 14 of the Constitution. As `what is personal law’ has nowhere been defined, the court will have to test the validity of triple talaq.