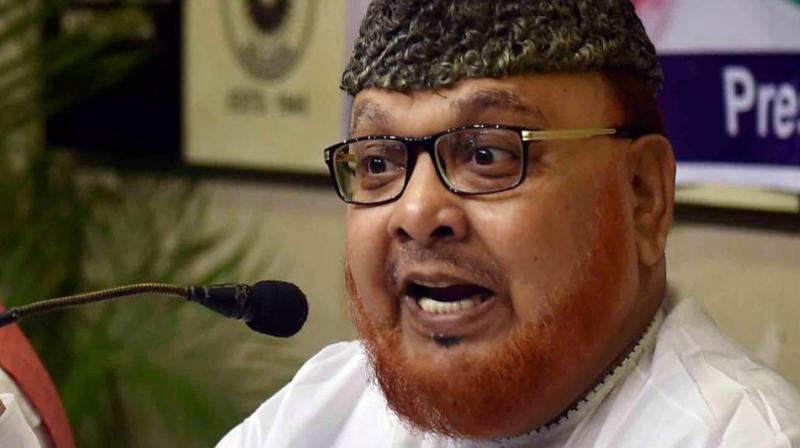 Kolkata: The controversial Shahi Imam of Tipu Sultan mosque, Noor-ur Rahman Barkati, who once threatened to ostracise and beat up Muslims if they joined RSS and BJP, was today sacked for allegedly making anti-national statements and "misusing" his position.

Barkati, however, refused to step down, asserting, "Nobody has the right to remove me".

"We have sent him the notice of termination and he has been asked to vacate the office room allotted to him. We have asked his deputy to conduct prayers and we will appoint a new imam very soon," Prince Ghulam Ahmed Wakf Estate trustee Arif Ahmed told reporters.

"We have removed him as the imam of the mosque for his anti-national statements. We never expect an imam, who is a religious person, to cross his line and misuse his post," he said.

Ahmed said, "Barkati had shown disrespect to our national leaders and he was using the mosque for political purpose, and for his own financial gains."

"He was cautioned earlier for his activities. Recently, he was served a show-cause notice for his speeches seeking to incite people," he said.

Asked if Barkati was removed under political pressure, Ahmed said, "There was no such pressure".

Barkati was embroiled in a controversy last week when he refused to remove the red beacon from his vehicle, saying it was his right to use it.

Barkati had earlier attacked Prime Minister Narendra Modi over demonetisation, saying, "Every day people are harassed and face problem due to demonetisation....Modi is bluffing the society and the innocent people of the country through demonetisation and nobody wants him to continue as PM."

He had recently said those who chant 'Jai Shri Ram' outside mosques were "hijras" (eunuchs).

On being asked what steps the board would take in the event of Barkati digging in his heels and refusing to step down, Ahmed said, "In that case we will go for legal action".

On the wakf trustee board's termination notice to him, Barkati said, "Who are they to remove me? They have no right to do so. I will continue as imam of this mosque. Only the Muslim community can remove me."

Barkati went on to say, "My Muslims brothers are with me. Actually an Urdu newspaper and a section of TMC MPs are conspiring against me and want to remove me so that they can siphon off the wakf property."