The TMC won a decisive majority in Domkal, Raigunj and Pujali in the plains and Mirik in the hill area. 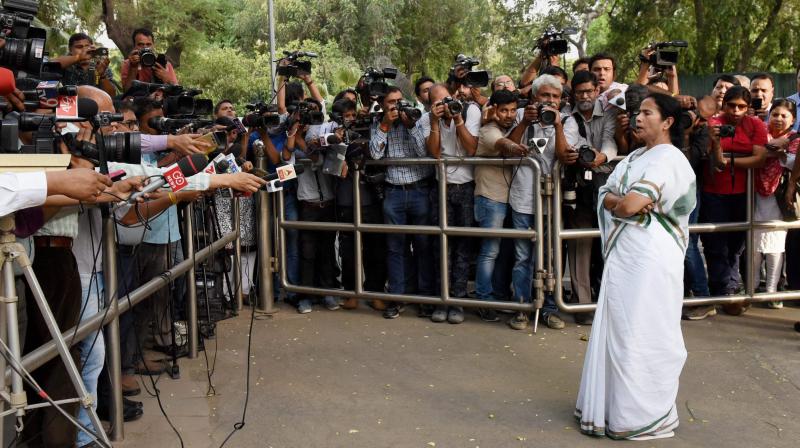 Kolkata: The Trinamool Congress (TMC) on Wednesday swept the municipal polls in Bengal, capturing four of seven civic bodies and breaking the 10-year-old hold of the Gorkha Janmukti Morcha (GJM) in the hills.

The TMC won a decisive majority in Domkal, Raigunj and Pujali in the plains and Mirik in the hill area.

"The hills are smiling," Chief Minister Mamata Banerjee tweeted. "Congratulations to Ma Mati Manush for again & again putting their trust in us," the Trinamool leader said in another tweet.

The GJM maintained its supremacy in the hills winning three municipalities -- Darjeeling, Kurseong and Kalimpong.

In Domkal in Murshidabad district, the TMC captured 18 of the 21 wards. The Congress won two, and the CPI(M) one.

The civic poll results underline Banerjee's continuing hold over the state, with the two main Opposition parties -- the Left and the Congress -- together winning only six seats.

The BJP, which has its eyes set on Bengal where it hopes to take the Trinamool on in the next assembly election, also failed to make a dent -- winning just three seats.

"We all know that the TMC has used money and muscle power to win the elections. Democracy was brutally murdered in this elections," BJP state president Dilip Ghosh said.

The BJP won one seat in the Raigunj municipality of North Dinajpur district and two seats in Pujali in South 24 Paraganas.

The TMC captured 24 of the 27 wards in Raigunj, while the Congress bagged two.

Banerjee's party won 12 of the 16 wards in the Pujali municipality, while the Congress and an Independent won one seat each.

The Morcha virtually made a clean sweep in Darjeeling winning 31 of its 32 seats, while the TMC managed to win one. In Kurseong municipality, the GJM won 17 wards and the TMC the remaining three.

The Gorkha front won 19 of the 23 seats in Kalimpong, while the TMC bagged two.

The Jan Andolan Party of Harka Bahadur Chetri, a former GJM leader, managed to win only two seats in Kalimpong.

"Congratulations to my brothers/sisters in hill areas of Darjeeling, Kurseong, Kalimpong, Mirik for participating in the democratic process. Special thanks to Mirik for reposing faith in us. We will work sincerely for you. After so many decades we begin a new era in the hills," Banerjee tweeted.

The opposition called the civic election a "farce", with Ghosh stressing that it was "not a real reflection" of the people's mandate.

"What is the use of conducting election in Bengal? The TMC doesn't allow free and fair elections. If an opposition candidate manages to win, they poach on him," he said.

CPI(M) leader Sujan Chakraborty echoed his views. GJM supremo Bimal Gurung hailed the victory of his party in the hill areas and accused the TMC of misusing administrative and money power in certain pockets including Mirik, where the TMC registered a victory.

TMC secretary general Partha Chatterjee dismissed the allegations as a "reflection of the political frustrations of the opposition".