A defence spokesman while confirming it said that Jaitley is in Srinagar “to review the overall security situation in the Valley”. 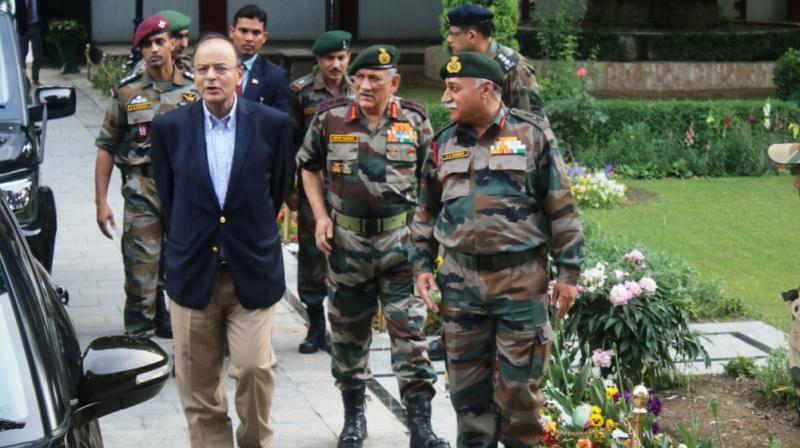 Srinagar: Defence Minister Arun Jaitley on Wednesday asked the Army and other security forces to go all out against militants and terrorists and target them wherever they are in Jammu and Kashmir.

He also stressed upon the need to sustain "tight vigil" along the Line of Control (LoC) and the International Border (IB) with Pakistan and thwart any attempts of infiltration from across the borders. The government has already given the Army and the Border Security Force (BSF) a free hand to respond to any ‘misadventure’ from across the borders, the sources here said.

Jaitley, however, also asked the security forces that while going tough against militants they should avoid collateral damage during counterinsurgency operations in J&K and “ensure safety of the innocent people while dealing firmly with the inimical elements”.

The Defence Minister held a single marathon session with top officials of various security forces including Army here on Wednesday as part of a series of meetings planned by him during a two-day visit of Jammu and Kashmir to review the overall security situation in the restive State.

He is also scheduled to visit a few locations along the Line of Control (LoC) which witnessed escalation in tensions following the beheading of two Indian soldiers allegedly by Pakistan army’s Border Action Team (BAT) on May 1 and subsequent skirmishes in which several civilians were killed and have forced the border dwellers to desert their shell-hit hamlets.

Army Chief General Bipin Rawat also arrived here from New Delhi and after holding a separate meeting with the local commanders to discuss the security scenario in the hinterland and along the de facto border with Pakistan, he joined the Defence Minister at a briefing held at the Army’s 15 Corps headquarters in Srinagar’s Badami Bagh Cantonment during which Jaitley was briefed by commanders on ground regarding the operational and logistics preparedness.

A defence spokesman while confirming it said that Jaitley is in Srinagar “to review the overall security situation in the Valley”. He said that the Army Chief and other senior officers and Defence Secretary (designate) Sanjay Mitra also attended the security review meeting. “The Defence Minister was apprised of the various measures initiated to strengthen the robust counter infiltration grid along the LoC. He was also briefed on the close coordination amongst all the government agencies towards bringing back normalcy in the region,” the spokesman said.

He added that Jaitley while lauding the valour, sacrifice and patriotic fervour of every soldier who is serving in these challenging situations for national integrity which the entire country was proud of” urged all to continue the good job being done and ensure safety of the innocent people while dealing firmly with the inimical elements.  He also impressed upon the commanders to maintain strict vigil along the LoC and remain prepared to give a befitting reply to any misadventure from across, the spokesman said.

The security situation prevailing in the Kashmir Valley in the backdrop of unending student protests and streets clashes and a series of recent terror strikes by militants including the murder of a young Kashmiri Muslim Army officer Lieutenant Ummer Fayaz Parry will also be discussed threadbare at the Defence Minister’s separate meetings with Governor N.N. Vohra and Chief Minister, Mehbooba Mufti, the official sources said.

Jaitley is here also to chair the 14th GST Council as Finance Minister. The two-day event from Thursday will be attended by finance ministers, finance secretaries and other taxation officials from all the states and union territories and is considered a crucial meet on new tax regime. A meeting of the Fitment Committee and another of the concerned officers for preparatory purposes were held at Sher-i-Kashmir International Convention Centre (SKICC), the venue of the event overlooking Srinagar’s Dal Lake, on Wednesday. “The formal GST Council meeting will be held on Thursday while the decisions taken at it will be spelled out by the Finance Minister at a press conference on Friday,” said an official spokesman.

Meanwhile, Kashmir Economic Alliance (KEA) has voiced its concern over the GST Council meet. Terming it a “well-hatched plan” of the Centre to implement the all-India new tax regime in Jammu and Kashmir, it said that such a move would be aimed at eroding financial autonomy of the State. “We are not against any tax regime which is for the betterment of the business community. But J&K state is not like any other state in India. It has as special status guaranteed under article 370 under which this law can’t be implemented here,” said KEA chairman Farooq A. Dar. He added that the GST ought to passed through State Assembly and endorsed by the people before it is implemented in J&K.