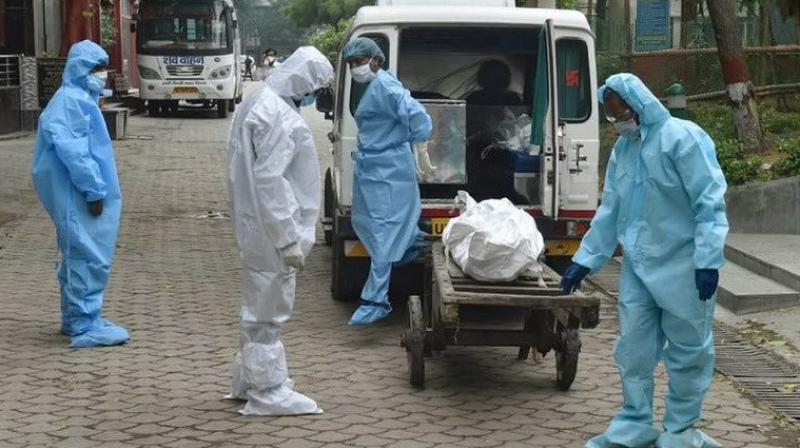 The concern specifically includes on how the statistical model projects estimates for a country of geographical size and population of India and also fits in with other countries which have smaller population. (Representational image: PTI)

New Delhi: India on Saturday questioned the World Health Organisation's methodology to estimate COVID-19 mortalities in the country, saying using such a mathematical modelling cannot be applied to estimate the death figures for such a vast nation of geographical size and population.

The Union health ministry issued a statement in response to a New York Times article titled India Is Stalling WHO's Efforts to Make Global Covid Death Toll Public dated April 16, saying the country has on several occasions shared its concerns with the global health body over the methodology used.

India has been in regular and in-depth technical exchange with the World Health Organisation (WHO) on the issue. The analysis, which uses mortality figures directly obtained from Tier I set of countries, uses a mathematical modelling process for Tier II countries (which includes India), the ministry said.

"India's basic objection has not been with the result (whatever they might have been), but rather the methodology adopted for the same.

"The model gives two highly different sets of excess mortality estimates of when using the data from Tier I countries and when using unverified data from 18 Indian states. Such a wide variation in estimates raises concerns about validity and accuracy of such a modelling exercise," the ministry said in the statement.

During these exchanges, specific queries have been raised by India along with other member states -- China, Iran, Bangladesh, Syria, Ethiopia and Egypt -- regarding the methodology, and use of unofficial sets of data.

The concern specifically includes on how the statistical model projects estimates for a country of geographical size and population of India and also fits in with other countries which have smaller population, the statement said.

Such one size fit all approach and models which are true for smaller countries like Tunisia may not be applicable to India with a population of 1.3 billion.

"WHO is yet to share the confidence interval for the present statistical model across various countries," the statement said.

"India has asserted that if the model is accurate and reliable, it should be authenticated by running it for all Tier I countries and if the result of such exercise may be shared with all member states," it said.

The model assumes an inverse relationship between monthly temperature and monthly average deaths, which does not have any scientific backing to establish such peculiar empirical relationship.

India is a country of continental proportions, climatic and seasonal conditions vary vastly across different states and even within a state and therefore, all states have widely varied seasonal patterns.

"Thus, estimating national level mortality based on these 18 states data is statistically unproven," the statement stated.

The Global Health Estimates (GHE) 2019 on which the modelling for Tier II countries is based, is itself an estimate. The present modelling exercise seems to be providing its own set of estimates based on another set of historic estimates, while disregarding the data available with the country, the statement said.

"It is not clear as to why GHE 2019 has been used for estimating expected death figures for India, whereas for the Tier 1 countries, their own historical datasets were used when it has been repeatedly highlighted that India has a robust system of data collection and management," it stated.

In order to calculate the age-sex death distribution for India, WHO determined standard patterns for age and sex for the countries with reported data (61 countries) and then generalised them to the other countries (incl. India) who had no such distribution in their mortality data.

Of the covariates used for analysis, a binary measure for income has been used instead of a more realistic graded variable. Using a binary variable for such an important measure may lend itself to amplifying the magnitude of the variable.

WHO has conveyed that a combination of these variables was found to be most accurate for predicting excess mortality for a sample of 90 countries and 18 months (January 2020-June 2021). The detailed justification of how the combination of these variables is found to be most accurate is yet to be provided by WHO, the statement noted.

"Further, India has undertaken COVID-19 testing at a much faster rate than what WHO has advised. India has maintained molecular testing as preferred testing methods and used Rapid Antigen as screening purpose only. Whether these factors have been used in the model for India is still unanswered," the statement stated.

Containment involves a lot of subjective approach (such as school closing, workplace closing, cancelling of public events) to quantify itself. But, it is actually impossible to quantify various measures of containment in such a manner for a country like India, as the strictness of such measures have varied widely even among the states and districts of India. Therefore, the approach followed in this process is very much questionable.

"In addition, subjective approach to quantify such measures will always involve a lot of biasness which will surely not present the real situation. WHO has also agreed about the subjective approach of this measure. However, it is still used," the statement said.

According to the statement, during interactions with WHO, it has also been highlighted that some fluctuations in official reporting of COVID-19 data from some of the Tier I countries, including the USA, Germany, France, defied knowledge of disease epidemiology.

Further inclusion of a country like Iraq which is undergoing an extended complex emergency under Tier I countries raises doubts on WHO's assessment in categorisation of countries as Tier I/II and its assertion on quality of mortality reporting from these countries.

"While India has remained open to collaborate with WHO as data sets like these will be helpful from the policy making point of view, India believes that in-depth clarity on methodology and clear proof of its validity are crucial for policy makers to feel confident about any use of such data.," the statement said.

"It is very surprising that while New York Times purportedly could obtain the alleged figures of excess COVID-19 mortality in respect to India, it was unable to learn the estimates for other countries!," the statement added.