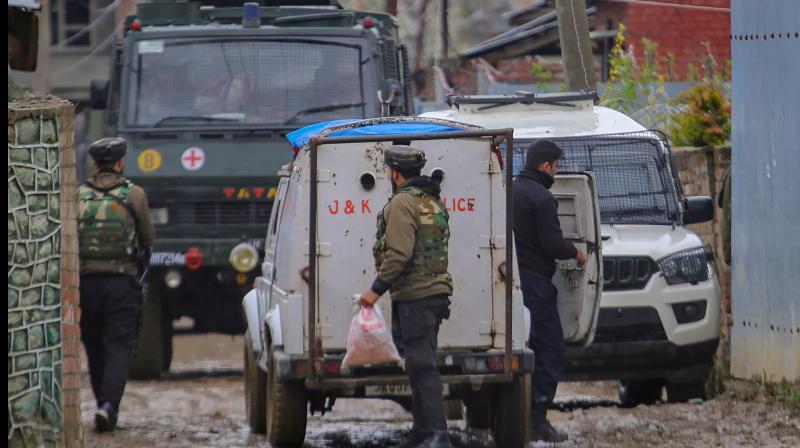 Security forces cordon off area during an encounter with militants amid nationwide lockdown at Sopore in Baramulla. PTI photo

Srinagar: Restrictions on the movement of people in Kashmir to contain the spread of coronavirus completed one month on Friday, even as the number of red zone areas in the valley has risen to 80, officials said.

They said the security forces have sealed off main roads in most places in the valley and erected barriers at several other places to check the unwanted movement of the people and to enforce the lock down.

Only persons with valid passes were allowed to move, they added.

The declared containment or red zones across the valley have been sealed to ensure strict adherence to the standard operating procedure.

The officials said there were 80 red zones in the Kashmir valley and all such areas would remain as red zones up to 42 days, unless no new positive case of COVID-19 is detected.

If any new case is detected in those areas, then from that date, the area will again remain a red zone for another 42 days, they added.

They said those areas have been sealed off and strict restrictions would were being implemented there.

The officials said rapid anti-body testing would be initiated in red zones very soon and Jammu and Kashmir will be among the few states in the country to do that.

Meanwhile, the markets across the valley were shut and public transport was off the roads with only pharmacies and groceries allowed to open, the officials said.

Educational institutions across Kashmir are closed, while all public places including gymnasiums, parks, clubs and restaurants were shut down more than a week before the nationwide lock down announced by Prime Minister Narendra Modi.

While the Prime Minister announced the country-wide lock down on the evening of March 24, the union territory administration here had on March 22 announced a lock down across Jammu and Kashmir till 31 March as part of its efforts to curb the spread of the coronavirus.

The administration said the essential services including healthcare personnel have been exempted from the restrictions.

Restrictions were first imposed in many parts of the valley on March 19 to contain the spread of the virus infection. The measures were taken after the detection of the first positive case of coronavirus in the valley.

The total number of positive cases in the union territory has risen to 314. Four patients have died in Jammu and Kashmir and 36 have recovered.

More than 58,000 people have been kept under surveillance including those who are either in government established quarantine facilities or in home isolation.

Till date 58076 travellers and persons in contact with suspected cases have been put under surveillance which include 7463 persons in home quarantine including facilities operated by government, 265 in hospital quarantine, 272 in hospital isolation and 29366 under home surveillance. Besides, 20706 persons have completed their surveillance period, the officials said.