Congress senior spokesperson Ajay Maken asked for an unemployment allowance of Rs 5,000 to all unemployed in the national capital 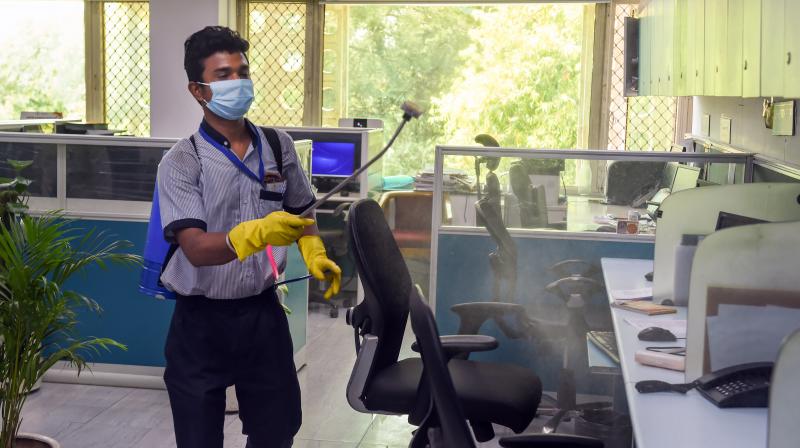 : A worker sanitizes inside Nirman Bhawan during Union Group of Ministers (GOM) meeting on COVID-19, amid the nationwide lockdown to curb the spread of coronavirus, in New Delhi. PTI Photo

New Delhi: The Congress on Friday said migrants and daily wagers should be incentivised as it put forth a 10-point demand charter before the Arvind Kejriwal government to help those in distress in the national capital due to COVID-19.

The party demanded that fixed power charges be waived off and school fees should not be charged from students, besides payment of salaries of school teachers in aided schools and workers in MSMEs by the government.

Congress senior spokesperson Ajay Maken sought Standard Operating Procedures (SOPs), to be notified as regulations, for delivery boys in the national capital to help stop the spread of the deadly virus through them.

He said all 89 people who were in touch with a Pizza delivery boy, feared to be infected with the virus, and have been quarantined should be immediately tested.

Addressing a press conference through video-conferencing, Maken said testing should be ramped up in the national capital and asked whether Delhi had entered the community transmission stage-3 of the virus as 135 people have been kept "under investigation".

The former Delhi Congress chief said migrants should be incentivised in Delhi and in other towns as they are the backbone of any city and demanded that they be given Rs 7,500 per month immediately to help them cope with the crisis.

"Migrants are the backbone of any city and hence they should be incentivised to make them feel safe in Delhi and other towns," Maken said.

He also demanded payment of ration for two months to the poor and vulnerable, besides advance payment of pension to senior citizens and widows and risk allowance to sanitation and frontline health workers.

Maken also asked for an unemployment allowance of Rs 5,000 to all unemployed in the national capital.