Many security forces personnel have been killed in Kashmir, but the trend of attack on families is causing worry in Srinagar and Jammu. 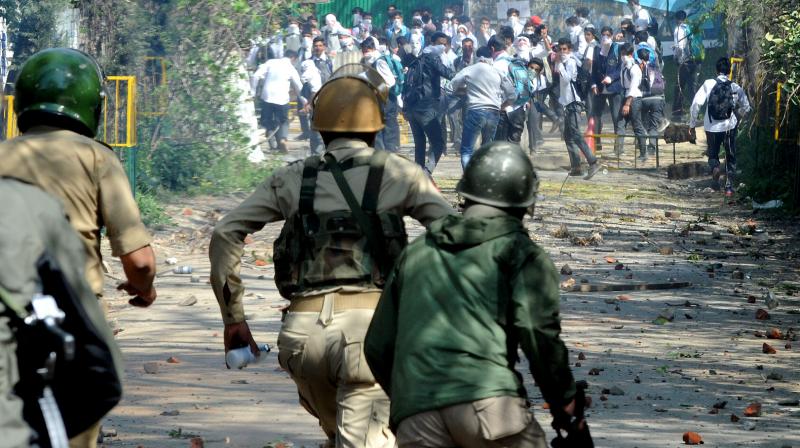 Srinagar: It appears the situation is growing worse and Kashmir is more or less back to ‘square one’. The attacks on mainstream political activists by suspected militants have intensified over past week which is reminiscence about difficult times they had faced in early 1990s.

On Sunday night, a local attorney was shot dead by gunmen inside his house in southern Shopian district. Imtiyaz Ahmed, a former public prosecutor, who was associated with opposition National Conference (NC) received a call on his mobile phone. Soon three masked men barged into his house in Pinjora village of Shopian and shot him from a point-blank range. He was rushed to a nearby hospital where doctors declared him as brought dead. However, another report said that, after being called on his phone, Ahmed was shot at near his house.

The incident came a day after a pharmacy owner and ruling Peoples’ Democratic Party (PDP) activist Bashir Ahmed Dar was shot dead by suspected militants in Qasbayar village of neighbouring Pulwama district. His cousin Altaf Ahmed Dar was critically wounded in the shootout. A couple of more mainstream political activists have been targeted in similar fashion elsewhere in the Valley during past few days, spreading fear among others and their families.

A notorious pro-government gunman Rashid Billa who had worked for various security forces in the past and was involved in a number of murders including the October 5, 1996 massacre of seven civilians in Sadaerkote Balla of Bandipore was also shot dead by gunmen inside his home in Hajin area of the district on Sunday night, the police said..

Also, gunmen have over the past couple of weeks, visited the homes of ‘pro-India’ political activists and some police officers across the Valley, mainly south Kashmir, asking them to “mend your ways or face dire consequences”. While the activists have been asked to stay away from political engagements, the police officials were told to quit their jobs.

In Soaf Shalli village of Kokernag in Anantnag district, a PDP worker was severely thrashed at the weekend by suspected militants who also asked him to publicly apologise for being associated with the party. This is reminiscent of early 1990s when hundreds of political activists, mostly those belonging to the NC, announced ‘izhar-e-la taluqi (disassociating themselves from their respective parties) through paid advertisements in local vernacular newspapers. Dozens of those including sitting and former legislators and ministers who resisted it and stayed obstinate were murdered later.

A militant outfit had in March asked the ‘pro-India’ activists to disassociate themselves from their parties and stay away from their political activities or be ready to face consequences. The outfit had said that these political activists should decide also on the call of their conscience as “terrible atrocities” were being inflicted on the people of Kashmir by the government forces. While the security already provided to prominent people from these parties was reinforced or, at least, their personal security officers were alerted against possible attacks, the fate of others has been left at the mercy of militants as, the authorities maintain, “it is not possible to provide security cover to each and every political worker”.

Following the Soaf Shalli incident during which the intruders had also ransacked the home of the political activist, the police detained two members of rightwing Jamaat-e-Islami. But, as is being largely believed in the area, the police is groping in the dark. Amidst this hapless situation for the mainstream political activists, a number of amateur videos showing some of them being harassed and apologizing for being associated with “traitor” parties at gunpoint or otherwise have gone viral on social media. The police sources said that more than two dozen such incidents have been reported from south Kashmir district of Anantnag, Pulwama, Kulgam and Shopian alone recently. In fewer cases, the gunmen “politely” asked the political activists and policemen or their families that they should quit “in the interest of freedom movement and the people.”

“However, in the case of police officials they have been really furious. We have reports that gunmen visited the homes of many officials over past two weeks in their absence as they are performing their duties elsewhere and threatened their families that their wards would be harmed unless they quit,” said a senior police official.

On March 8, J&K’s Director General of Police, Shesh Paul Vaid, had issued an indirect warning to separatist militants that their families could be harmed too if they try to target those of policemen fighting the 27-year-old insurgency in the State. “My take is; we should not bring the families into this conflict whether those of terrorists or policemen. Families have nothing to do with this. We must keep them away from this,” Mr. Vaid had said while speaking to this newspaper.

The warning came days after militants had barged into the residence of a police officer of Dy SP’s rank in Chillipora Heff village of Shopian and after damaging electronic appliances and breaking windowpanes warned his family that he should “quit his job or face the consequences.” They had also told the family the police and other security forces were damaging the properties of the people and should know “we can also do it.” The police officer is posted in Srinagar. Reacting to it, the DG police had said that the militants too have families. "Militants should realise they too have families. Let militants take this as a warning", he had told a TV channel earlier adding  that it was between police and militants and that families should not be brought into the conflict. “If the police start doing this, what will happen to their families", he had asked.

In August 2016 when the Valley was on the boil in the aftermath of the killing of Hizb-ul-Mujahedin’s Internet-savvy poster boy Burhan Muzaffar Wani, Kashmir’s indigenous militant outfit had asked the J&K policemen to stay at home and not to be part of the measures aimed at containing the unrest. “We appeal police personnel to sit at their homes like the employees of other departments are doing. The fate of the policeman who attends duty will be nothing but death,” one of its commanders Riyaz Naik had said in an 11-minute video that surfaced on the social media.

He also ahead of a police recruitment rally asked the Kashmiri youth to ignore “enticement aimed at breaking their ranks’ and threatened those who wished to join the police force should also be ready to face the consequences. However, the threat was ignored by, at least, more than 5,000 youth who participated in the rally.

During the post Wani killing, the height of anger against the security forces particularly the J&K police and CRPF was such that there were a few attacks at the families of local policemen by enraged mobs. One such attack took place at Chadrigam in Tral area of southern Pulwama on July 12, 2016 when a mob barged into the house of a police official Muhammad Ashraf and beat up his wife and daughter. However, the thrashing of the mother-daughter duo evoked condemnation in the Valley and beyond and many people took to the social networking sites to voice their disapproval.

Though hundreds of policemen have been killed and injured in militant attacks during more than two and a half decades old militancy and issuing of threats to them by various militants outfits is a routine, gunmen’s choosing to barge into their residences to threaten them or their family in a new trend which has caused much worry in Srinagar, Jammu and Delhi.