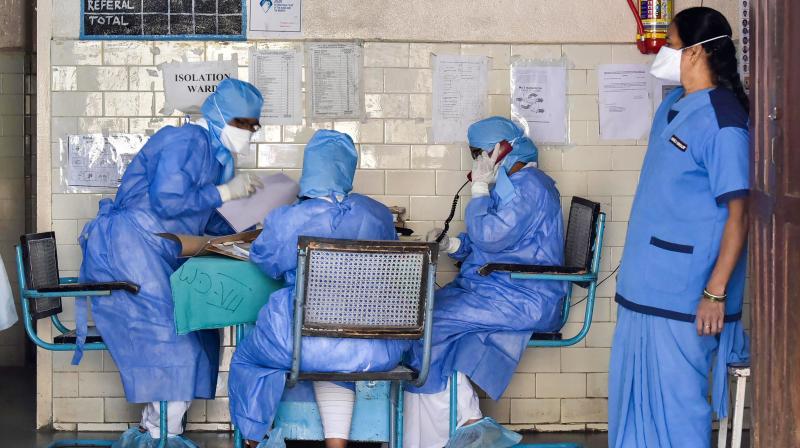 Medics outside an isolation ward of a hospital. The doctor who treated a man who tested positive after his death has also been found positive. (PTI )0060B)

Kalaburagi/Bengaluru: A doctor who had treated a coronovirus-infected man who died in Kalaburagi last week has tested positive for COVID-19, officials said here on Tuesday.

The 63-year-old doctor has been placed under quarantine at his home along with his family members and is being shifted to an isolation ward, Kalaburagi deputy commissioner Sharat B said.

A 20-year-old woman who travelled from the UK has also tested positive for the coronavirus, taking the total number of positive cases in Karnataka to 10.

"We have got 2 more #COVID2019 cases in Karnataka taking the total number of confirmed cases to 10", health and family welfare minister B Sriramulu tweeted.

These ten cases include that of the 76-year-old Kalaburagi man who died "due to co-morbidity and has also tested positive for COVID-19" last week.

On Monday, a 32-year-old man who returned from the US via London earlier this month tested positive for coronavirus, making it the eighth case in Karnataka.

He was on home quarantine and has now been admitted in an isolation facility.

"He returned from US via London on 8th March 2020 (same flight as patient number 4 who tested positive)," officials said.