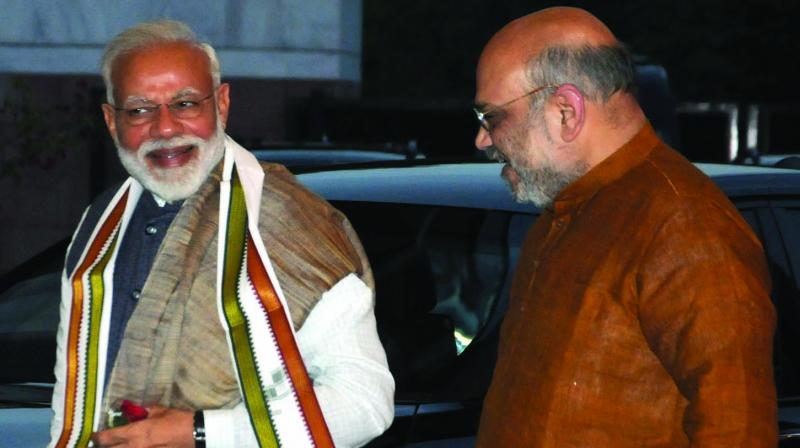 New Delhi: Taking Congress’ “chowkidar chor hai” barb head-on, Prime Minister Narendra Modi on Saturday launched a social media campaign #MainBhiChowkidar, asking people to pledge their support against “corruption, dirt, social evils” and to work hard for the progress of India. The campaign reminded many of the BJP’s 2014 Lok Sabha campaign strategy around the Opposition party’s “chaiwala” barb that had prompted the BJP to launch its successful “Chai pe charcha” campaign to connect with voters and register a landslide victory.

The Congress has been accusing the Prime Minister of corruption in Rafale fighter jet deal, using the barb “chowkidar chor hai (watchman is a thief)” after Mr Modi called himself a “chowkidar” of the nation.

In his four-minute social media video on Saturday, Mr Modi said, “Your chowkidar is standing firm and serving the nation. But, I am not alone. Everyone who is fighting corruption, dirt, social evils is a chowkidar. Everyone working hard for the progress of India is a chowkidar. Today, every Indian is saying #MainBhiChowkidar.”

As the #MainBhiChowkidar started trending, Congress president Rahul Gandhi took a dig at the hashtag by tweeting, “Defensive tweet Mr Modi! You feeling a little guilty today” and tagged photographs of Nirav Modi, Mehul Choksi and others, along with Mr Modi. The Congress often accuses the Modi government of assisting economic offenders and favouring industrialists.

The BJP hit back with its official twitter saying: “Nervous tweet Mr Rahul! Looks like you are scared today seeing so many #MainBhiChowkidar. It’s quite natural for robbers to be nervous when they see #Chowkidar.”

It was Congress’ Manishankar Aiyar, who had called Mr Modi, then the BJP’s Prime Ministerial candidate in 2014, a “chaiwala” and had faced severe criticism for mocking Mr Modi’s humble background.

The BJP then built its 2014 campaign narrative around the “chaiwala” barb and even launched a successful mass connect programme  — Chai pe charcha - and registered a landslide victory in the last Lok Sabha elections.

The ruling party’s 2019 general election campaign to remain at power is also built around Mr Modi’s “unmatched leadership” and his government’s performance.