“It is not Rs 5 lakh as promised by Modi; he has exaggerated it 10 times,” the Congress leader alleged. 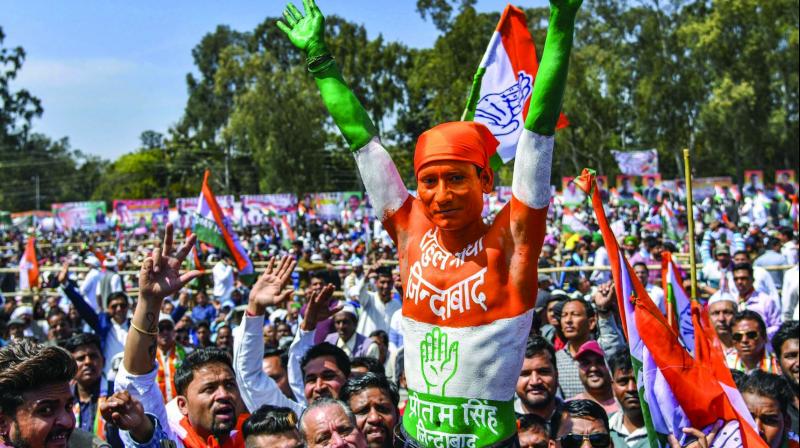 Congress supporters during a Parivartan Rally in Dehradun on Saturday. (Photo: PTI)

New Delhi: Launching a scathing attack on the NDA government’s much hyped Ayushman Bharat or Pradhan Mantri Jan Aarogya Yojana (PMJAY), which promises health insurance cover to poor of upto Rs 5 lakh, Congress alleged on Saturday that it is not for the common man but actually a “lifesaver” for private insurance companies and hospitals.

Asserting that the government’s claims about the success of the scheme are “fake and false,” senior Congress leader Jairam Ramesh said beneficiaries can avail treatment costing only up to Rs 50,000 under this scheme on the premium of Rs 1,100 paid by the government.

“It is not Rs 5 lakh as promised by Modi; he has exaggerated it 10 times,” the Congress leader alleged.

“The claim that ‘Modicare’ has provided each household insurance cover of Rs 5 lakh is a huge fraud,” he claimed.

He further said that 11 crore people across the country are already covered under respective health insurance schemes of various states and the Centre’s Rashtriya Swasthya Bima Yojana (RSBY).

“10 crore people to be benefited under the Ayushman Bharat are not over and above the 11 crore beneficiaries who are already availing benefits,” the senior Congress leader said, adding, “Modi is trying to take credit for various health schemes through Ayushman Bharat.”

Emphasising that the Ayushman Bharat Yojana (ABY) or PMJAY, which is also described as ‘Modicare,’ is conceptually wrong, Mr Ramesh said: “It doesn’t cover diabetes and high blood pressure, the two common ailments in India.”

“Patients will not have access to adequate healthcare under PMJAY because it excludes outpatient treatment, which 87 per cent of ailing persons undergo. Outpatient treatment is a serious financial burden that accounted for 63 per cent of `4,955 spent by households out of their pockets on health in 2014,” he said.

The country does not need health insurance that benefits private players but health assurance which helps common man, he added.

This is possible through right to health as promised by Congress chief Rahul Gandhi.