India   All India  17 Mar 2018  Here's why a West Bengal village stands still for 52 seconds every weekday
India, All India

People of Abhainagar village in Nadia district stop all work for 52 seconds at 10.50 am every weekday to sing the National Anthem. 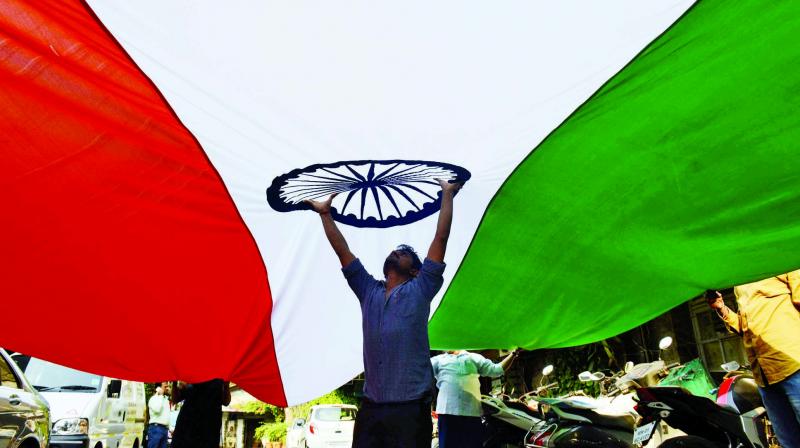 A loudspeaker has been fitted around 100 feet away from the school building and those who hear the National Anthem being sung through it, join the chorus, school Headmaster Safikul Islam said. (Photo: Rajesh Jadhav | Representational)

Abhainagar: Setting a novel example, the people of Abhainagar village in Nadia district stop all work for 52 seconds at 10.50 am every weekday to sing the National Anthem.

People at home and those in moving motorbikes, auto-rickshaws, cycles and pedestrians on road stand still wherever they are and start singing.

At that particular hour, students of the state-run-Abhainagar Primary School sing the 52-second-long National Anthem and it is echoed to nearby areas through loudspeakers.

"We thought this would instil patriotism among the students and the people. We had requested the villagers, wherever they are, to sing the National Anthem along with their children at the school. They agreed and the practice continues," said the school Headmaster Safikul Islam.

A loudspeaker has been fitted around 100 feet away from the school building and those who hear the National Anthem being sung through it, join the chorus, Islam said.

"I along with two others was passing by the school with crops on our head on Wednesday. At that time we heard the National Anthem on the loudspeaker. We stopped walking and started to sing along. It felt good," said 50-year-old farmer Maijuddin Biswas.

Champa Bibi, 26, used to bring her two daughters to the school and leave at once for home.

"Now my daughters asked me to wait and leave the school only after singing the Jana Gana Mana along with them. This is a nice job done by the school," she said.

Narsina Bibi cooks mid-day meal in the school. "When the bell rings for the National Anthem, I stand up and sing it from the kitchen," she said.

"We can make announcements using this and it will also help us make faster communication with guardians," Islam said.

Abdul Mannan Seikh, member of the Tehatta 2 Panchayat Samity, said he is aware of the effort.

"The people of the area are basically illiterate. If the locals respond to the appeal of the school, it is most welcome. The idea is good for instilling patriotism," he said.