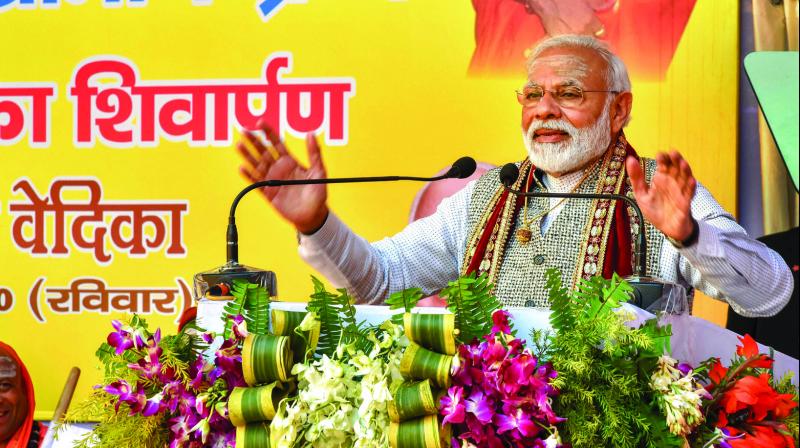 Varanasi: Ruling out any rethink on decisions on CAA and Article 370, Prime Minister Narendra Modi on Sunday asserted that his government remains and will remain firm on the steps despite pressure from all sides.

“Be it the scrapping of Article 370 from Jammu and Kashmir or the Citizenship Amendment Act (CAA), the country waited for decisions on these for years,” he told a public meeting here during a day-long visit to his Lok Sabha constituency.

“These decisions were necessary in the interest of the nation. Duniya bhar ke saarey dabao ke bawjood, inn faislon par hum qayam hain aur qayam rahengey (Despite pressure from all sides, we remain firm on these decisions and will continue to remain firm,” Modi said.

Provisions of Article 370 of the Constitution, which accorded special powers to the erstwhile state of Jammu and Kashmir, were abrogated by the government in August last year.

Citing certain key decisions of his government, Modi referred to the trust set up for the construction of the Ram temple in Ayodhya and asserted that it would work “rapidly”.

“A trust has been formed for the construction of a grand Ram temple in Ayodhya. This trust will work rapidly,” he said.

He said that after setting up of the trust, the work on the construction of ‘Ram dham’ will start with fast speed and added that his government has also decided to transfer 67 acres of land to the trust.

The government had recently set up the Shri Ram Janmabhoomi Teerth Kshetra on the Supreme Court’s directive to the Union government to form a trust that can look into the construction and management of the temple.

The Prime Minister earlier launched or laid foundation of 50 projects worth Rs 1,254 crore in his Lok Sabha constituency.

He also flagged off IRCTC’s ‘Maha Kaal Express’ through video link during his day-long visit to the city.

It will be the first overnight privately-run train in the country to connect three Jyotirling pilgrimage centres of Varanasi in Uttar Pradesh, and Ujjain and Omkareshwar in Madhya Pradesh.

The Prime Minister dedicated to the nation the Pandit Deendayal Upadhyaya Memorial Centre and unveiled a 63-foot statue of the RSS ideologue — the tallest statue of the leader in the country.

“The soul of Pandit Deendayal Upadhyaya give us encouragement. We are working for uplift of Dalits, deprived and others sections. And this is what Upadhyaya’s ‘Antyoday’ says — to give all facilities to last beneficiary in the queue,” Modi said.

He said that in past few years, Rs 25,000 crore worth developmental projects have either completed or were going on in fast speed in Varanasi.

Roadway, highway, waterway and railway have been given top priority by the government and the Purvanchal Expressway work was going on at fast speed in Uttar Pradesh.

The Prime Minister also laid emphasis on better connectivity of heritage and religious sites, saying that tourism will be the main source of making the country 5 trillion dollar economy.

He said, “Our behaviour as a citizen will decide direction of the country in future. Country is not made by governments only, but values of people residing here.”

Soon after his arrival here, Modi participated in the closing ceremony of the centenary celebrations of the Shri Jagadguru Vishwaradhya Gurukul and released the translated version of the Shri Siddhant Shikhamani Granth in 19 languages and its mobile application.

Launching the ‘Shri Siddhant Shikhamani Granth’ Mobile App, the prime minister said it is a coincidence that the centenary celebrations are taking place at the beginning of a new decade and that this decade will once again establish India’s role in 21st century in the world.

He said the digitisation of Shri Siddhant Shikhamani Granth via Mobile App will further strengthen the engagement with the younger generation and will also inspire their lives.

He said translation of Granth in 19 languages will help in making it accessible to a wider public.

The Prime Minister said, “Our conduct as a citizen will determine the future of India, will decide the direction of a new India.”

He said following the path shown by the saints, we have to fulfil the aspirations of our lives and continue to cooperate fully in nation building.

Mr Modi appreciated people’s contributions in creating awareness about cleanliness and taking the Swachhta Mission to each and every corner of the country.

He urged them to use ‘Made-in-India’ products.

He also asked everyone to participate in Jal Jeevan mission to make it a success.

The Prime Minister said a significant and visible improvement was made in cleaning the Ganga River. This, he said, could be achieved only because of the public participation.

He evinced keen interest in the products on display as he went around several stalls and personally interacted with buyers and artisans coming from different countries, including the US, England and Australia.

The Uttar Pradesh government had launched the ambitious scheme ‘One District, One Product’ (ODOP) in which one craft per district was identified.