A climate scientist said that if the current trend is any indication, there are chances that 2020 would be the hottest year for Kerala 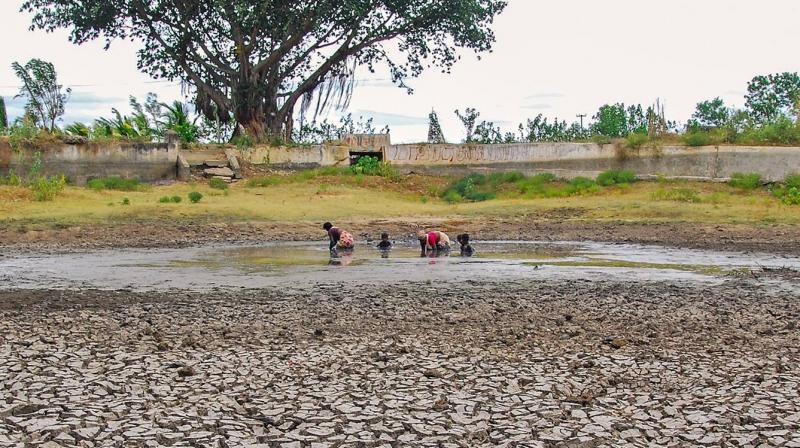 Farmers work near a parched land on Monday in Palakkad, Kerala

Kerala, once known for its moderate and comfortable climate where people never had to bother about the extreme weather conditions occurring in other parts of the country, is now bearing the brunt of climate change. Very heavy rains, floods, extreme dry spells and heat wave and sun stroke deaths were never heard of in this state. Though increasingly hotter days and water scarcity were the ominous signs of climate change, it is the 2018 August floods the worst natural calamity in the century which redefined the social perception.

This year, even before the summer intensified, mercury levels in the day have reached record heights with Palakkad registering maximum temperature of 37.1 degree Celsius on Saturday, the highest in the country.

Both the daytime and night temperature remains high and the lowest temperature (the early morning mercury level) has increased by nearly 3 degree Celsius when compared with the data of last 30 years.

In 2019, there were instances of sun stroke deaths and severe sunburns and Palakkad and Punalur recorded unprecedented increase in temperature of above 40 degree Celsius many times. The State Action Plan on climate change has already listed Palakkad as the major climate change hotspot and recommended remedial measures.

“Many parts of the state started experiencing extreme summer like situation even during January. The usual chilly days during the Xmas and New Year weeks were absent and the days were warmer. It is the unrestrained destruction of ecologically sensitive Western Ghats, rivers, mountains and wetlands which catalysed the impacts of climate change in Kerala,” said Purushan Eloor, environmental activist.

According to Skymet Weather due to strong north-easterlies, the day temperatures are likely to increase further, but, mornings may remain on the comfortable side. The temperatures have already started settling above normal by 3-4 degrees Celsius in parts of Kerala and Tamil Nadu for the past few days. Mercury has even touched 37 degrees Celsius in some parts of both the states leading to hot and humid weather conditions, it added.

Dr. C. G Madhusoodanan, climate scientist said that if the current trend is any indication, there are chances that 2020 would be the hottest year for Kerala in recent years. “However, even a minor shift in weather can drastically reduce the temperature. With increased daytime temperature, evaporation from the sea will be high and there is likely to be afternoon convective rain. Though its spread and duration will be very limited, the amount of rainfall will be high and it can bring down the mercury level considerably. But extreme dry weather will continue in places like Palakkad and Punalur where easterly winds influence the condition,” he said.

No fishes in sea, forest fire a major threat

Global warming due to climate change has made Kerala a fragile ecosystem highly vulnerable to extreme weather conditions. The disruption in climate has already started affecting various sectors and the livelihood of people.

Organisations in fisheries sector have been raising the issue of drastic depletion in marine fisheries resources in last few years. Kerala known for its high consumption of fishes is now depending on other states as the popular varieties like sardine and mackerel are not available along Kerala coast. The fishes migrate to cooler waters.

“There is sufficient scientific evidence for migration of fishes to other regions due to climate change. With warming of the sea, the fishes find preferable temperature in northern latitudes and eastern longitudes, thereby extending the distributional boundaries and establishing fisheries in new coastal areas. As our seas heat up it is expected that the abundance of these fishes may increase around Gujarat and West Bengal coast in the coming years,” said Dr. B. Madhusoodana Kurup, Founder Vice Chancellor, Kerala University of Fisheries and Ocean Studies.

The increasing number of forest fire is another major challenge. In last few years, a number of fire incidents have been reported from forest areas in Kerala.

Three forest watchers were killed on Sunday during a major forest fire that occurred in Vadakkanchery forest range in Thrissur district.

“Wildfires occur in small areas of forest in Kerala. Though it can be termed as negligible compared to massive fires happening in western countries, the extent of damage is much bigger considering the rich biodiversity and rare species,” added Dr. C. G Madhusoodanan.

Changes in monsoon pattern have also impacted groundwater level, course of rivers and once water plenty households in the state are now solely depending on Kerala Water Authority’s piped or tanker water supply.

Meanwhile, the IMD issued a warning last week that maximum daytime temperature would be 2 to 4 degree Celsius above the normal temperature.