1951 as cut-off year for ‘indigenous Assamese’?

As panel divided over quotas, both views sent to Centre. 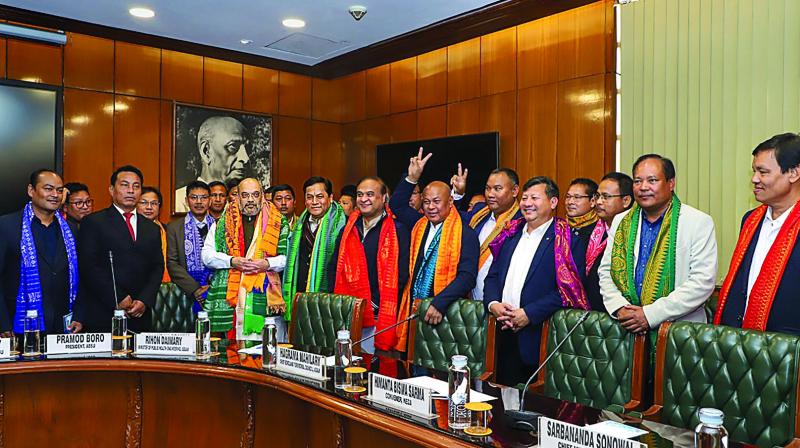 Union home minister Amit Shah, Assam CM Sarbananda Sonowal and others after the signing of the accord in New Delhi. (Photo: PTI)

Guwahati: The high-powered committee appointed by the Union home ministry on the implementation of Clause 6 of the Assam Accord has recommended taking 1951 as the base year to identify and grant “indigenous Assamese” status to those who should be given constitutional protection.

Clause 6 promises constitutional, legislative and administrative safeguards to protect, preserve and promote the culture, social, linguistic identity and heritage of the “Assamese” people.

Asserting that there was a complete consensus that 1951 should be the cut-off year for identification of Assamese people who will be eligible for constitutional safeguards under the provisions of Clause 6 of the Assam Accord, sources said the committee also suggested introduction of the Inner Line Permit (ILP) system in the entire state, and protection of the land rights of indigenous people. The committee recommended creation of an Upper House to ensure representation of all the tribal and ethnic groups. The committee also suggested measures for protection of Assamese and other tribal and ethnic languages of the state, along with protection of the cultural heritage of all communities.

The 91-page report was prepared by the committee led by Justice Biplab Sarma (Retd), which met various stakeholders before finalising its recommendation to the Union home ministry.

Clause 6 of the Assam Accord was not implemented as successive governments failed to create a consensus on the definition of “indigenous Assamese”. “If the ministry of home affairs accept the recommendations, only people having linkage prior to 1951 would be considered as indigenous Assamese,” said a sources in the committee, adding that the committee also advised implementation of all clauses of the Assam Accord and asked the Centre to take a diplomatic initiative to deport foreign nationals as suggested by the Supreme Court.

Prime Minister Narendra Modi, during his recent visit to Kokrajhar, said the Centre would implement Clause 6 as soon as it receives the committee report. “Immediately after the committee submits its final report, our government will expedite the process to implement the recommendations,” he had said. The MHA constituted the committee in July last year. In the past seven months, it met representatives of organisations and individuals and took the views of the Centre and state government to prepare the report.