Commercial markets will remain closed and there will be no business activity during the bandh on February 18, the trade body said. 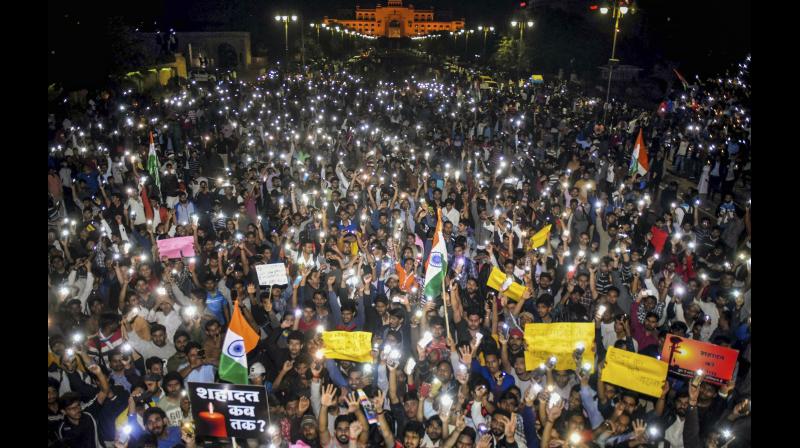 Trade body said, 'all wholesale and retail markets in Delhi will observe a bandh on 18 February'. (Photo: PTI)

New Delhi:  In the wake of the terror attack in Pulwama, the Confederation of All India Traders (CAIT) has called for an all India bandh on February 18, to express solidarity with the family of the slain soldiers.

Commercial markets will remain closed and there will be no business activity during the bandh, the trade body said.

All wholesale and retail markets in Delhi will observe a bandh on 18 February, it said.

Acting on the call by CAIT some states- Karnataka, Gujarat, some districts of Maharashtra, Kerala, Chattisgarh, Himachal Pradesh, Jharkhand, and Eastern UP observed a bandh on Saturday.

CAIT national president BC Bhartia and secretary general Praveen Khandelwal said that during the bandh, traders will keep a day-long fast and will take out tribute march and candlelight march in their respective states.

The CAIT said it is also planning to organize financial assistance to be sent by the traders to the families of the killed soldiers.

The trade leaders said that 18 states, including Maharashtra, Madhya Pradesh, West Bengal, Uttar Pradesh, Rajasthan, Tamil Nadu, Punjab, Haryana, Jammu and Kashmir, and others are set to participate in the bandh.

Nearly 40 CRPF personnel were killed after a suicide bomber attacked a CRPF convoy in Jammu and Kashmir's Pulwama district with a vehicle laden with explosives.

The convoy comprised 78 buses in which around 2,500 personnel were traveling from Jammu to Srinagar.

JeM, a Pakistan-based terrorist group, claimed the responsibility for the attack which left the bus extensively damaged in the blast.