CM has been sitting on a dharna for the last five days demanding the Centre to recall Bedi and implement the helmet enforcement rule. 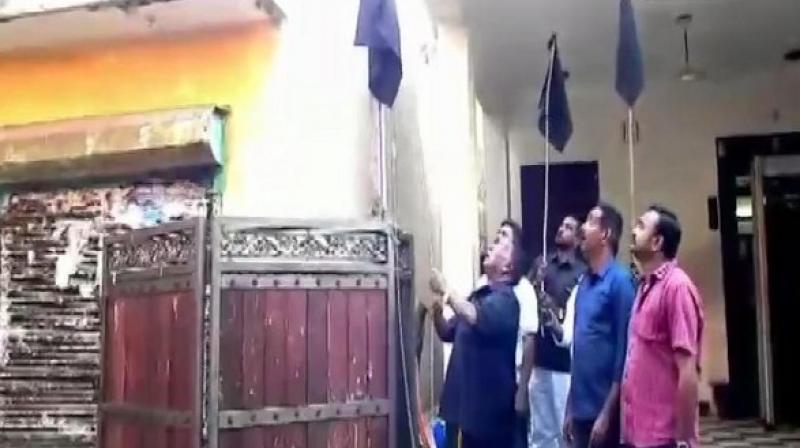 On Saturday, Bedi had written an open letter inviting the Chief Minister for a discussion in a public forum. (Photo: ANI)

Puducherry: Puducherry chief minister V Narayanasamy on Sunday hoisted a black flag at his residence as a mark of protest against Lieutenant Governor Kiran Bedi.

Narayanaswamy has been sitting on a dharna for the last five days demanding the Centre to recall Bedi and implement the helmet enforcement rule in a phased manner.

On Saturday, Bedi had written an open letter inviting the Chief Minister for a discussion in a public forum.

In an immediate response to the letter posted by Bedi on her blog, Narayanasamy in a series of tweets hit back at the Governor questioning her efforts to work for the people of the state.

"Please do not fool Puducherrians by your social media campaigns," he tweeted.
Bedi has been at loggerheads with the Puducherry government on various issues, with Narayanasamy accusing her of delaying clearance to welfare schemes and bypassing the elected government.

On Wednesday, the Chief Minister had begun a protest outside the Raj Bhawan, Bedi's official residence, alleging that she was misusing her powers and also interfering in the day-to-day activities of the government.

Protesting outside the Raj Bhawan wearing black clothes, Narayanasamy alleged that Bedi was forcing upon the law-abiding citizen's rules such as compulsorily wearing helmets, among others.