Congress president Rahul Gandhi during his last two visits to the state on January 25 and February 6 targeted the BJD and BJP on the chit fund scam. 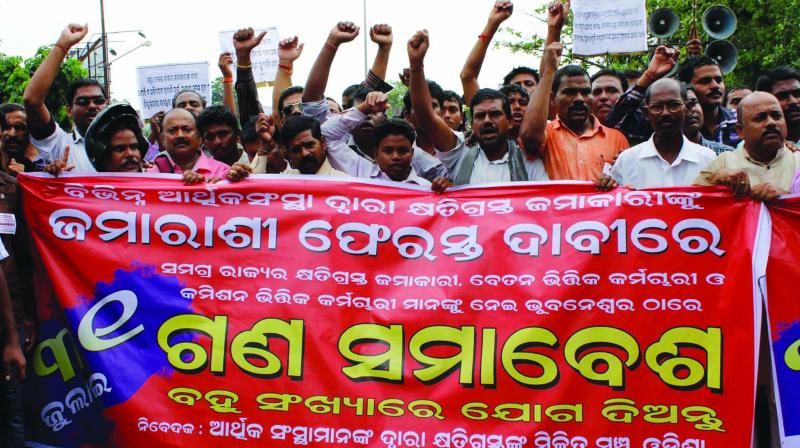 Bhubaneswar: The Central Bureau of Investigation’s (CBI) allegedly dilatory approach to bring all the key culprits of the Rs 35,000-crore chit fund scam to book has raised doubts about the agency’s sincerity to probe the irregularities that affected nearly 20 lakh people in the state.

The delay, which has become a major political issue, has also put the BJP in a state of embarrassment as the Congress accuses the saffron party’s Central government of shielding the culprits as most of them belong to the ruling BJD.

State Congress leaders allege that the CBI, at the instance of the BJP, is not acting against the BJD leaders as the two parties are planning to have an understanding in the post-Lok Sabha poll scenario.

“The BJP is quite apprehensive of repeating their 2014 Lok Sabha polls tally. Only because of this reason, the BJP leaders are going soft on BJD leaders. The BJP leaders have closed their eyes to the giant plunder of money from the gullible people,” says Congress vice president Arya Kumar Gyanendra.

Analysts believe the regional BJD, with which the BJP shared power in the state from 2000 to 2009, might extend support to the saffron party in case the latter does not get the required number of seats in the coming general elections to retain power at the Centre.

In political circles, the buzz is that the CBI is deliberately going slow on the issue as some of its officers have “dubious” connections with the chit fund fraudsters.  In fact, a former director of CBI, after his retirement, came down to Odisha and joined a newspaper organisation whose owner was later arrested in chit fund scam. Besides, one more senior official of the agency, as the Opposition leaders alleged, met leader of the ruling BJD from time to time to “extract” money to shield them.

Congress president Rahul Gandhi during his last two visits to the state on January 25 and February 6 targeted the BJD and BJP on the chit fund scam.

Mr Gandhi said the BJP has deliberately kept mum on the chit fund irregularities as it wants to use the scam, through the CBI, to frighten the BJD and extract its support as and when necessary.

“The multi-crore chit fund scam by the BJD leaders has come as political weapon for the BJP leaders. Prime Minister Narendra Modi using this scam to remote-control the BJD,” charged Mr Gandhi.

Odisha state BJP vice president Samir Mohanty refuted the Congress president’s accusation and said his party had been demanding for arrest of all the accused involved in the scam.

“The CBI is an independent agency. Unlike the Congress which meddled in the agency’s activities in the past, we never interfere in the its functioning. We want that all accused, irrespective of their party affiliations, must be brought to book,” said Mr Mohanty.

The CBI which took the chit fund scam investigation in Odisha following a Supreme Court order in May 2014 has almost slipped into a state of complete inaction after arresting a few BJD leaders, including a sitting Lok Sabha member and two MLAs. Despite the central probe agency claiming to have “clinching” evidences a few more BJD leaders and official who worked at Naveen Niwas, the residence of chief minister Naveen Patnaik, the agency has almost stopped all its actions for the last two years, excepting serving notices to two sitting BJD MLAs.

What has prompted the Opposition to doubt the CBI’s integrity and sincerity to pursue the scam in right earnest is that although the BJD leaders served with notices do not appear before the agency, it is not taking any further steps, thus allowing them time to move the court and seek anticipatory bail.

Analysts maintain that although Mr Modi and BJP national president Amit Shah during their recent visits to Odisha referred to the chit fund scam, they did not make “forceful” demand for expediting the probe.

At least 174 chit fund firms have been found by Justice M.M. Das Commission to have looted 20 lakh people by promising high returns.