The short-live controversy, however, gave some tense moments to Kangana and the film-makers. 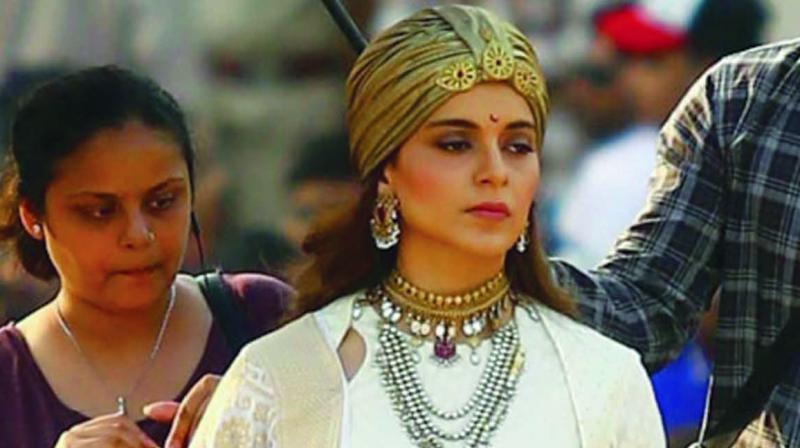 Jaipur: Will a film based on Rani Lakshmi Bai meet the same fate as Sanjay Leela Bhansali’s Padmaavat based on Rani Padmini? Hard to tell.  Upcoming Kangana Ranaut-starrer Manikarnika: The Queen of Jhansi had a close shave recently when the Sarva Brahman Mahasabha (SBM) threatened to disrupt the shooting alleging that it distorts the histor but later withdrew its objections.

Just like the Karni Sena, which had imagined a love scene between Alauddin Khilji and Rani Padmini in Padmaavat and launched and agitation, the SBM raised an alarm, which later turned out to be false, over perceived romance between Rani Lakshmi Bai and British political agent Robert Ellis.

But for the time being, the storm has withered away as makers of Manikarnika  and the SBM, a Jaipur-based Brahmin organisation opposing the movie, have reached an agreement.

The short-live controversy, however, gave some tense moments to Kangana and the film-makers.

Mahasabha president Suresh Mishra held a press conference in Jaipur in the first week of this month raising suspicion that the film was based on London-based Indian author Jaishree Misra’s historical novel, Rani.

Producer of the film, Kamal Jain, denied his charge and issued a statement saying that the film shows Rani Lakshmi Bai in a “respectful’’ manner. “The film doesn’t portray anything objectionable about her. There is no love affair depicted in the film and there is no distortion of history in any way,” he said.

Kangana, too, reiterated the same, albeit in strong words. “ It is a neech baat (very lowly talk) to even think like that about Rani Lakshmi Bai. We cannot even think like that, the kind of things they are saying. What they are saying is actually defaming. There is nothing like that. It is idle talk and I don’t know why it is being said,” the actor  told the media, while going to Bikaner where the film is being presently shot.

But that failed to pacify Mr Mishra who met home minister Gulab Chand Kataria and governor Kalyan Singh to seek a ban on the film’s shooting  till the film-maker gave an affidavit that there was nothing objectionable in the film.

Finally, Mr Jain came to Jaipur last week and met Mr Mishra of the SBM and handed over a letter reassuring them that there was no romantic song or sequence with the British in the film. In the letter, Mr Jain also categorically denied that the film was based on Jaishree Misra’s controversial book Rani.

Following the written clarification from the makers, an agreement was signed between the two sides. The mahasabha assured that the controversy over the film was now over and that Mr Jain can continue shooting the film in Rajasthan.