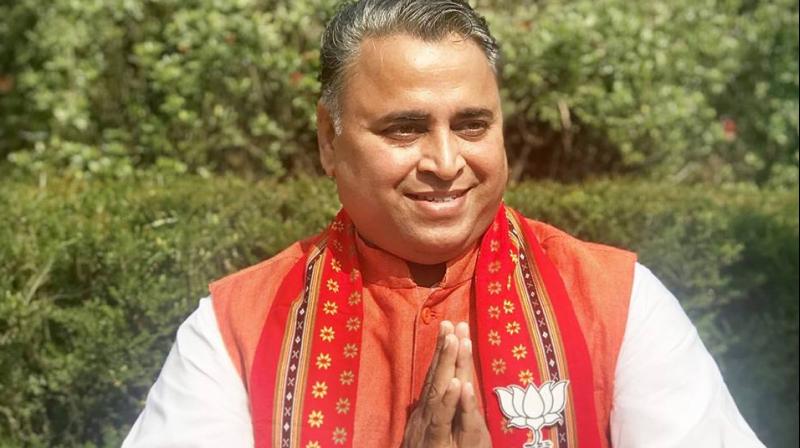 Deodhar alleged that Manik Sarkar's rule has only resulted in the poor becoming poorer, 67 per cent of the population holding BPL cards. (Photo: Facebook)

Agartala: The upcoming Assembly elections in Tripura are more about removing someone from power than bringing in somone else, says the Bharatiya Janata Party (BJP) state-in-charge Sunil Deodhar.

52-year-old Deodhar was initially a RSS pracharak who later morphed into a poll strategist for BJP.

He was Prime Minister Narendra Modi's campaign manager in Varanasi during the 2014 Lok Sabha elections and shifted to Tripura three years ago to build BJP's base in the state against the ruling Left Front government.

Since then, the BJP's fortune in the state has radically changed, as it went from being a non-existent force to one of the strongest contenders to the Manik Sarkar-led government in the elections scheduled for February 18.

"It is a fact that we are riding on a strong anti-CP(M) wave rather than a pro-BJP wave. It's more of a 'CP(M) hatao sentiment than a Modi lao one. And it's because of an incompetent chief minister, his misrule and bad governance." he said.

Deodhar alleged that Manik Sarkar's rule has only resulted in the poor becoming poorer, 67 per cent of the population holding BPL cards.

"On top of it the ministers are steeped in financial scams. And this Dhritarashtra prefers to keep his eyes closed and is only bothered about his chair. More than 12 lakh people have been looted by chit fund companies in Tripura and the state government is involved in it. That's why people want to remove this government from power," Deodhar told the media.

The BJP has however, not fielded a chief ministerial candidate in these polls.

"It wasn't required," he said, "The people are not interested in a prospective chief minister face. It is like when there was an Indira hatao wave in the country, people weren't too bothered about kisko lao. Once we come to power, the Parliamentary board and the elected MLAs will choose their leader."

It might also be for the fact that it is easier for the BJP now to ride the wave of removing the Left Front, than fielding a chief ministerial candidate strong enough to contend Manik Sarkar's popularity in the state.

Although BJP has not officially fielded a face for the post of chief minister, in all probability, the party's state president Biplab Kumar Deb, who is contesting from the Banamalipur seat in Agartala, will assume the position if BJP wins.

Deb will be taking on Communist Party of India (Marxist) state committee leader Amal Chakraborty in his seat.

"Now, at the final stages, the fight is neck to neck between us and the CPI(M). The collision will be head-on. But I am confident of victory," said Deodhar, when questioned about poll-prospects/

"At least 10 per cent voters are likely cast their votes in favour of the BJP on the day of the polls. They are scared to attend BJP meetings as they fear they might be attacked by CP(M) supporters and their NREGA work would disappear while government employees fear that they might get transferred and their homes could be set on fire. They say that we will do whatever needs to be done at the EVM machine. I am sure that if that swing happens on the day of polls, then we will sweep the state," he added.

When questioned if it was his RSS-background that has made it easier for him to take on another strong cadre-based party like the CPI(M), Deodhar said,"When people ask me how difficult it was for us, I tell them that instead of asking me that question you should go and ask the CPM that they too have never been pitted against a cadre-based organization like us. Kindly ask them, aapko kaisa lag raha hai (how do you feel)."

Deodhar has been developing RSS ideology in the Khasi and Jayntiya hills since 1991 but he prefers his current role as a BJP leader to his previous avatar.

"Amit Shah had entrusted me with the job of ensuring a Communist-mukt Bharat. No matter what the results are, I think I have delivered," he said.

Deodhar has been developing RSS ideology in the Khasi and Jayntiya hills since 1991 when he left home. But he prefers his present disposition of a BJP leader over his previous avatar of a RSS pracharak.