The Al-31F engines were recently in the news as the Indian Air Force had some concerns about the engines. 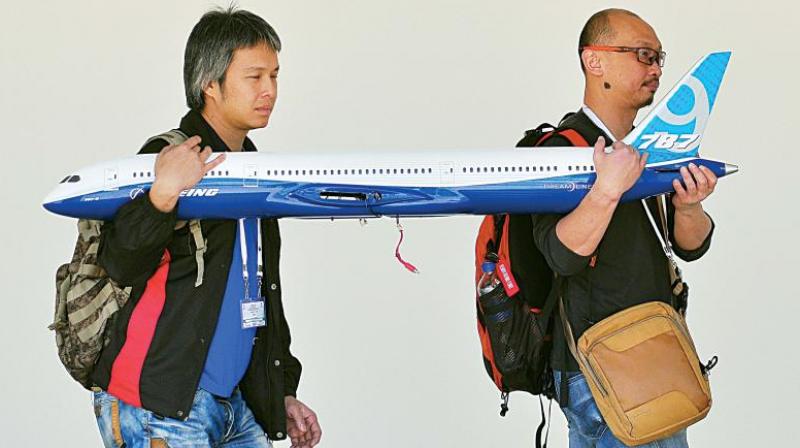 Boeing workers getting their stall readied at the Yelahanka Airbase in Bengaluru. (Photo: Satish B.)

Bengaluru: Mr.Vladimir Drohzhov, deputy director, Federal Service for Military-Technical Cooperation (FSMTC), who is leading the Russian delegation at Aero India 2017 insisted on Wednesday that there was nothing wrong with the Saturn AL-31F engine that powers the Indian Air Force's Su-30MKI.

“There is nothing wrong with Russian manufactured equipment as our quality controls are strong. After all Russia was the first country to recognise India's Independence in 1947. Our relations and cooperation are time tested,” he added.

The Al-31F engines were recently in the news as the Indian Air Force had some concerns about the engines. Assuaging its fears, Mr. Drohzhov said that IAF's inventory of Russian legacy aircraft coupled with the Air Force's continued use of them was testimony to the fact that the equipment was good.

Mr. Drohzhov recalled that Russia was supporting India in  operation, maintenance and reliability in many areas and claimed it was doing its bit in helping the ‘Make in India’ campaign.

“Brahmos is the best example of Russia supporting the Make in India initiative,” he said.  Su-30MKI, especially the licence produced version, the deal for Kamov 226T, the small multipurpose helicopter and joint production of Frigate 11356 (Talwar class) ships for the Indian Navy were some of the examples given by the deputy director to underline the cooperation between the two countries.

The director of United Engine Corporation, Alexander Artyukov revealed it  had developed a better successor to the AL-31 engine based on a new design. “The AL-41F-1S is a brand new engine which produces 18 per cent more thrust than its predecessor,” he explained.

UEC is set to display ‘BARK-88’,  its latest engine digital control system for mordernising the RD-33 family of engines, which power the MiG-29UPG that India uses.

Lot of opportunity in India: Dassault official
Dassault Systemes, a major player in 3D design software, 3D Digital Mock Up and Product Lifecycle Management (PLM) solutions, is showcasing its 3DEXPERIENCE platform and industry solution experiences for aerospace and defense at the GIFAS Pavilion at Aero India 2017.

Dassault Systemes Aerospace and Defence Industry Marketing Director Dominique Anderson spoke to Rohan Ramesh and addressed the key trends and challenges in the industry like supporting manufacturing, focusing on a local supply chain and additive manufacturing.

What is your main line of work and scope for business in India?
We at Dassault Systemes have redefined ourselves as a 3 experience company. We are helping companies, especially those involved in the military industry in India to help products that meet mission goals. What I mean is that a mission will have specific objectives and requirements for an aircraft as airborne platforms are our primary concern in India as far as I'm concerned.

We work with military, commercial aircraft with particularly things like the whole aircraft. As India is looking to establish an aerospace ecosystem, we're focussing right now of the fact that India is looking to acquire 200 single engined aircraft and 200 double engined aircraft in the near future. Also there is the commercial side as we see a lot of opportunity in India as it is a booming market.

Can you elaborate on the 3DEXPERIENCE platform that you are displaying here?

To support the 'Make in India' initiative, we're focusing on three things. First is support manufacturing, especially what we call agile manufacturing to help companies stay profitable. Mind you we don't want to place robotics everywhere but instead achieve a synergy between robot and human effort. It's called cobotics. Secondly we want to focus on supporting manufacturing by engaging the small and medium industries. We want to help them to produce designs from their in-house resources. We provide them solutions to help them win more business. Thirdly we want to concentrate on transformation engineering. This is based on what we call generative design. This means we can set and compare objectives and constraints to find the best result for our goal.