India   All India  17 Jan 2022  IED recovered in east Delhi part of consignment of explosives smuggled from Pakistan
India, All India 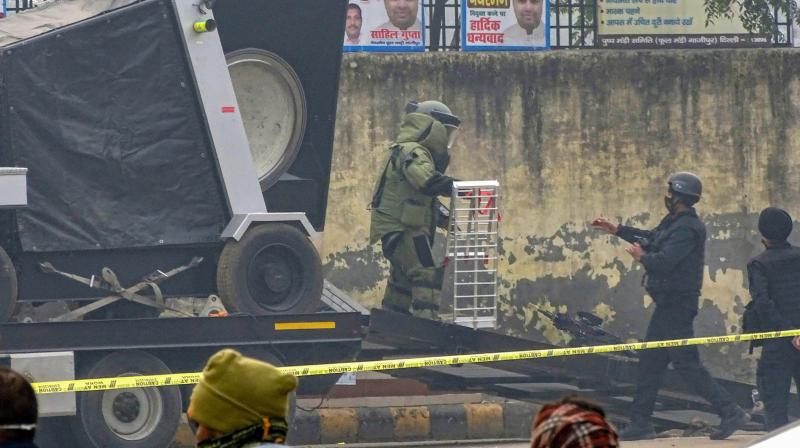 A member of a Bomb Disposal Squad attempts to defuse an IED bomb found inside a bag at Ghazipur flower market in New Delhi. (Photo: PTI)

New Delhi: The IED recovered in the Gazipur area of east Delhi was part of the consignment of explosives that were smuggled into India from Pakistan, according to Intelligence agencies.

"We have found that in Gazipur the bag contained IED wrapped with tape was planted by a sleeper cell. The explosives that were recovered weighed around 1.5 kilograms, contained both RDX and ammonium nitrate and had the potential to cause a high-intensity blast. It is expected that such bombs have reached poll-bound states through a network of sleeper cells," said a senior official to ANI.

He added that recoveries of explosives made by Punjab Police in recent months are just the tip of the iceberg.

He said that in the last few months there was a surge in drone activities in border areas, many times drones used to drop explosives especially tiffin bombs that were remained undetected and they might be used in terror activities before or during elections to create a law and order situation.

"In Ludhiana blast, RDX was used and again we found RDX in Gazipur in Delhi. It appears to be part of a consignment delivered from Pakistan that has reached Delhi through the channel of sleeper cells. Intelligence agencies are tracking suspects involved in the syndicate. We have also shared information with UP ATS," he added.

Intelligence and security agencies are on their toes after a Telegram channel in the name of Mujahideen Ghazwat-ul-Hind (MGH), an al Qaeda-affiliated terrorist group active in Kashmir, has claimed responsibility for planting an improvised explosive device (IED) at the Gazipur flower market last week.

"A Telegram channel has claimed that the explosives in Gazipur could not explode due to technical glitches but it does not mean their plan has failed. The message has been shared with Delhi Police and asked to increase patrolling in high footfall places," he said.

Teams of Delhi Police Special cell are in UP to get any leads in the case.
"We are working on the possibility that the suspect might have escaped through UP border after planting explosives in Gazipur flower market that is located in Delhi-UP border," he added.

Meanwhile, Delhi Police is scanning more than 80 CCTV located in the vicinity where the explosive was found in Gazipur.