While five coaches derailed, three other coaches partially got displaced from the tracks. 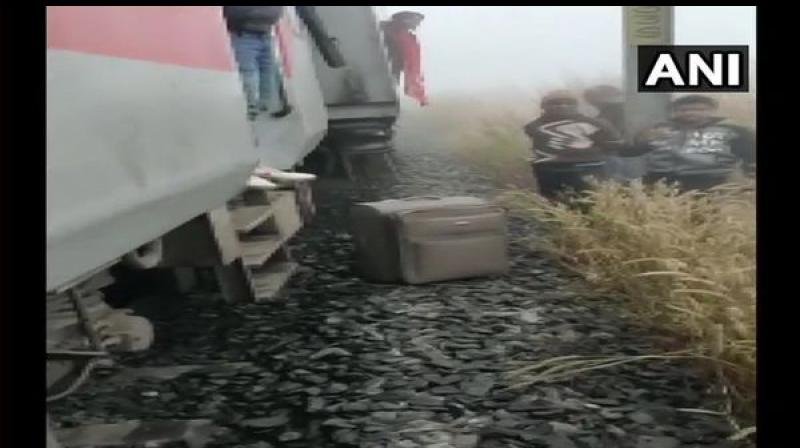 About eight coaches of the super fast express derailed after hitting a guard van of a goods train between Salagaon and Nergundi possibly due to dense fog. (Photo: ANI)

The mishap occurred at around 7 am, reports said.

According to initial reports, about eight coaches of the super fast express derailed after hitting a guard van of a goods train between Salagaon and Nergundi possibly due to dense fog.

While five coaches derailed, three other coaches partially got displaced from the tracks.

“There was no report of any casualty in the mishap and all passengers are out of danger,” the CPRO added.

“As many as 10 persons including two women and two children were admitted to casualty ward; one has been discharged after first-aid, three passengers sustained injuries on the head and are closely monitored,” said Cuttack SCB Hospital Emergency Officer Dr Bhubanananda Maharana. “A special team comprising doctors from Orthopaedics, Neuro Surgery and other departments are monitoring the situation. Presently 15 people, including four women and two children are undergoing treatment,” said Dr Maharana.

A passenger, Prabhu Tripathy, who had occupied Seat No 26 in B1 coach informed about the mishap through a tweet and sought help for passengers.

Union petroleum Minister Dharmendra Pradhan expressed concern over the derailment of Mumbai-Bhubaneswar LTT Express in Cuttack and prayed for early recovery of those injured in the mishap.

“Pained to learn about the accident of Mumbai-Bhubaneswar LTT Express in Cuttack. Relieved that no lives have been lost in the mishap. Rescue operations are underway and all efforts are being made to ensure the safety of passengers. Pray for the early recovery of those injured.” Tweeted Mr Pradhan.

Meanwhile, the railway authorities said a high-level probe will be initiated into the mishap to ascertain whether the train derailed due to poor visibility or any other reason.